We didn’t have television until the beginning of the sixties. One day my parents and my twin brother and I were watching something.

Suddenly Montgomery is seen in his open car coming slowly through a street in Copenhagen with four British soldiers on motorbikes at each side of the vehicle. It’s from the glorious days of the Danish liberation from five years of the German occupation. 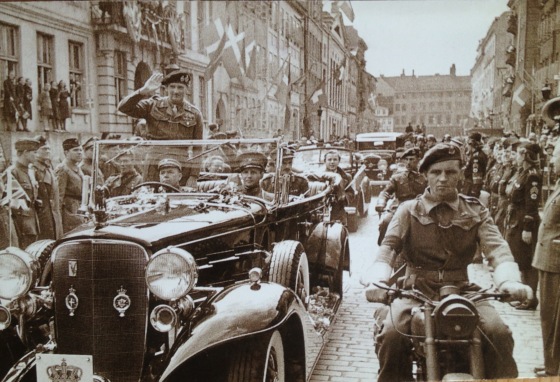 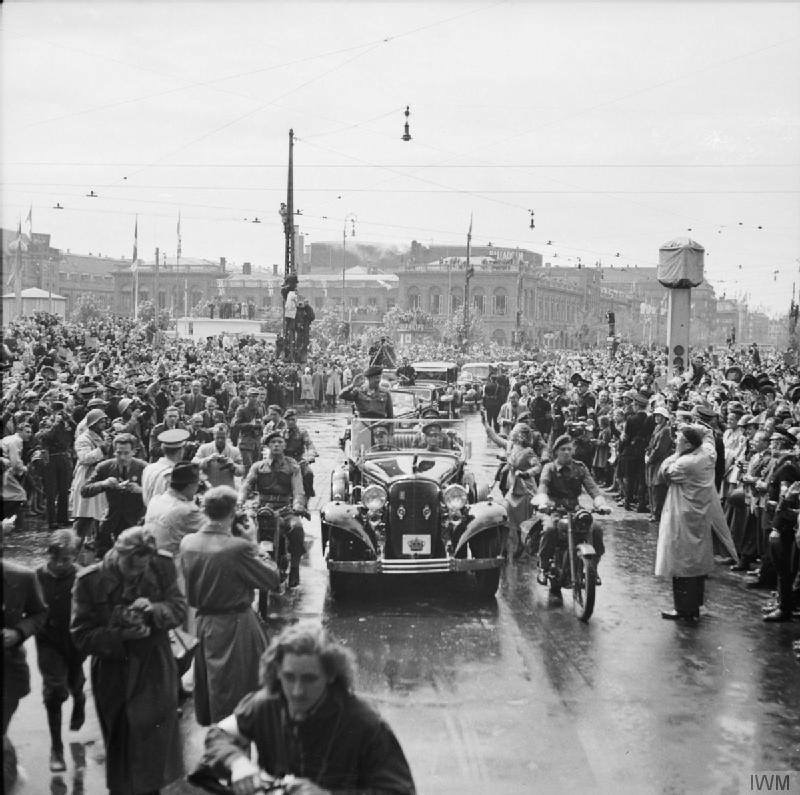 From May 1945 in Copenhagen

My mother raised up quickly and ran to the kitchen with her hands pressed against her mouth. I ran after her and asked what her what had happened.

Bill? and Ruth with a beret, May 1945 at the Gefion Fountain Copenhagen

I am so glad she told me that she had been engaged to Bill one of the motorcyclists. They had met in the memorial days of the liberation in May 1945. Bill had participated in the “desert war” in Africa with Montgomery and later at the Italian campaign. She showed me a beautiful golden ring with diamonds she had got from him. I knew that ring from my early days.

My father stayed in the living room and never reacted on the episode.

Little by little, I understood what this had meant for my mother, who was twenty-one years old in 1945. She worked full-time educated in a pharmacy, and she had studied every evening and did homework at nights to be able to go to university later.

The winters during the war had been “ice winters”, and she had studied at night with many layers of winter clothes on. Food became a scarcity in the cities.

She had moved from her home in the province to Copenhagen in summer 1944. She sometimes saw shootings and ran to hide in the bottom of a tram or in a door opening in the streets. Usually, she would go by bike, but all the tyres got stolen due to lack of rubber.

uprising at the Town Hall Sq. April 1945 by “Hippos” who helped the Germans

She hated the sound of German soldiers in the streets. Once she was stopped by one and asked in German:

Like many others, she sometimes had illegal leaflets, but not that day.

We called my mother’s suitcase “the resistant suitcase.” 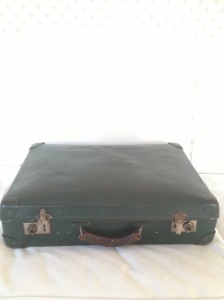 The little bag Ruth used for her books during her studies

Naturally, she was overwhelmed with joy when the message of the liberation sounded from the British radio. She ran out in the streets, and her younger brother was among those on the roof of a tram.

Young people celebrate the Liberation May 4, 1945 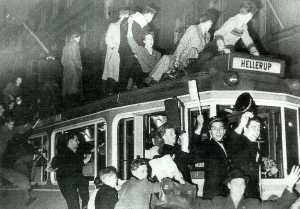 Young people celebrate the Liberation May 4, 1945

All this studying and working turned up to be unrealistic to manage, and she had to give up her studies after Bill left for Burma and never came back.

She told me that he died in Burma

She gave me a ring and a box full of letters and his beret. I had four small children when she gave me the things. I am sad to say that I threw the box away without even looking and gave away a ring. I don’t regret giving it away because the young woman was pleased with it and I remember my mother wearing it.

After my mother died in 2008, her brother told me that he had travelled to England in 1946 and searched for Bill and found that he had a new family in England. Her brother William, my uncle died earlier this months, and I have no more to ask about the details of this moving period of their lives.

My mother Ruth from her young days in Copenhagen during the last year of the war.

This story has influenced my life very much, and I have inherited her love for England and for foreigners. I know she appreciated that my twin brother and I finished college in a much calmer time 25 years later.

I have written more about this in the post “Writing Letters.”