Glimpses of My First Home

This will be the first of a series of “first” experiences

My parents got a small apartment in Copenhagen just before my twin brother, and I was born in 1951. We lived there the first three and a half years of my life, and I have some memories of that early period.

In a letter to my parents from my maternal grandfather, he recommended that my twin brother and I stayed a bit longer in the hospitals to move into the flat in good order. We were two months old before we were admitted to come home as we were born prematurely. Henry, my husband, has made a post on this issue too based on letters between my grandparents and my mother.

The living room my first home

We were hardly ever allowed in the living room, but I remember having been held up in the window and looking out to the building at the other side of the road. Our doctor had his office there. The furniture was collected at my parents’ wedding in 1948, and they were very strict on us not making any mess in this room. The cupboard was made of nut-tree and is now in my brother’s basement. The round big leather cushion on the carpet was bought in France on holiday in 1949. I have later sat on that listening to children’s programs on the radio in our next home, a real house. 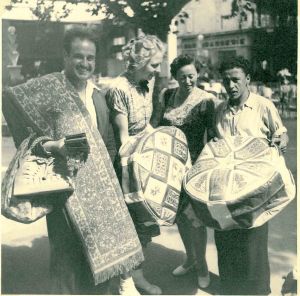 The small picture on the wall is a church where my maternal grandfather was working as a parish clerk. He worked as a school teacher as well.  My mother was very attached to her father.

The church where my grandfather was a parish clerk

My grandparents at our first Christmas 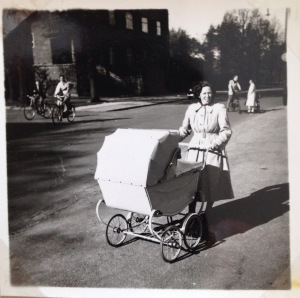 Our mother in the neighborhood where we lived spring 1951

Our first time out in the air

Our mother had a fight in keeping curious people away

In the kitchen, we had an ice cupboard. My mother got the ice in big blocks from a fish shop, and it was brought home lying under the twin pram. I have a memory of that and of our last trip in the pram where we sat on the bare mattress.  The pram was sold and exchanged with a toy cart that would serve as help when my parents took us to a park nearby. 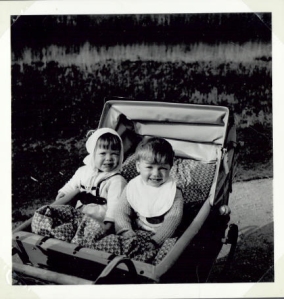 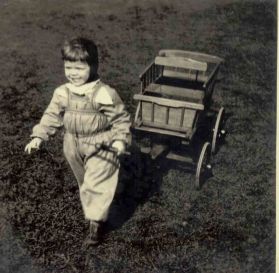 The only memory I have of the kitchen is a drawer with kitchenware we were allowed to play with. We played in the bedroom where our parents had a bunk bed. A gate had been put up between the door and the rest of the small flat. In a letter from my mother to her parents, she describes how my brother one day jumped over like a little lamb, and she is uncertain on how she shall cope with us being able to get around unhindered. Our father knew a professional photographer who came home to take pictures a few times in our lives. (Six months, one year old and at school start.)

Six months old me to the left

Six months old me to the left

Above pictures from our six months “anniversary.”

Above pictures from our one year’s birthday

1954 before we moved. The situation was staged I believe I remember it

My mother once fell down from the upper bunk. She needed to turn me around in my bed, and she had forgotten that she slept in the high position. My mother hurt herself immensely, but she convinced her parents in a letter that she was able to manage the housekeeping after some days. Our mother had told us this incident already then because I know that it happened when I was about three years old. Most likely the year after this picture beneath.

We have a custom in Denmark in February called “Fastelavn”, (Shrovetide) from before the Reformation. Children dress out in different costumes, then everything was homemade like “An old Vagabond” or a “Princess” a “Chinese” and children stand in a long line and are allowed to beat on a barrel with a stick to let break. The one who beats it in pieces becomes “The Cat King”, and the one who gets the last little part down is a “Cat Queen”. We were out walking in the snow with our mother, and we saw these long lines of children in a neighbouring yard. We didn’t belong there so we couldn’t attend. When we came home, our mother put up a cigar box in the doorway between the bedroom and the hall, and we beat it down with a gymnastic stick.

We never celebrated Halloween here, but from the 1990s the American custom has made its way to Denmark.

My father worked as a foreman at a radio factory not so far from our flat. He left home early in the morning on his moped. Once he would take drive a circle in around the playground beneath the bedroom window so that we could see him.

The yard was full of children in the daytime, and I have a memory of hitting the ground on my head falling from the swing. If we got some playground equipment, it would soon be stolen when we turned our back to the sandbox. Once it was gone, it couldn’t easily be replaced. I do remember the shapes of the red and green metal shovels for children. It’s rooted deep in me that things are precious and you don’t just throw them away.