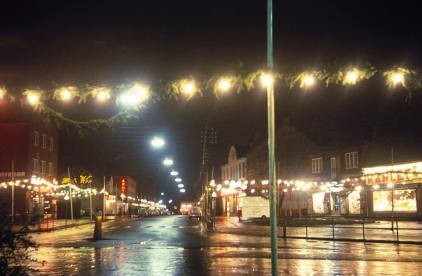 Christmas decoration in my hometown in my childhood

The shops and city streets were decorated later than now. Fir guirlands hang across the shopping areas with bright stars, bells and hearts hung as ornaments. The shops also had fir branches and Christmas decorations that were related to Christmas. It all came up in December. The same at home. A small portion of Christmas related decorations hung in their place at the beginning of December and close to the 24th of December, our Christmas tree was placed in the living room.  The tree would lose it’s needles after a few days in the warm house so it couldn’t come in earlier. Nobody thought of having everything in place a long time before Christmas.

The last twenty years we use another kind of a fir tree which doesn’t lose its needles but doesn’t have the lovely smell like the old tree. 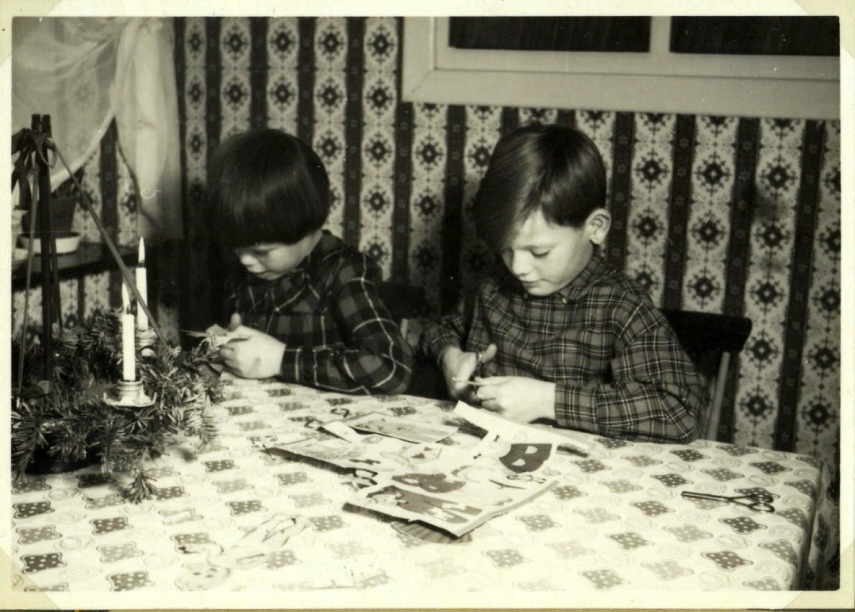 My twin brother and I couldn’t wait for Christmas and counting the days, we would make drawings with Christmas motives, cutting paper dolls and create Christmas decorations increasingly complex types as paper hearts and stars.

I was allowed to iron handkerchiefs

drawing from my early childhood

My father was a master in making beautiful Christmas decorations. Today most is bought ready made.

A paper hearth from my childhood. My father taught me to make them

A highlight in the preparations for us would be to go to our town or later on to Copenhagen to buy Christmas presents for our parents and each other. Entering a soap shop or perfumery had a certain intense smell as well of a flower shop which was cold, and you could smell the earth from the plants. I would go there with my father to buy a flower for our mother. The ladies working there would wear a thick coat and wellingtons.

The porcelain angels were a gift from us to our parents many years ago. We were so happy to buy them in Copenhagen

Photo credit to Bent Mogensen. A Daells Varehus, a compartment store in Copenhagen 1959 where I bought the body-lotion for my mother

Our mother was very modest, and she would write down some small suggestions for Christmas presents, and we went into the compartment store to buy a small bottle of Body Lotion that cost about half a dollar. She was so happy when she opened the gift. Our father would get socks or a tie. He didn’t express his feelings so explicit as our mother did. He liked to buy his own presents.

The last weeks of December we would help bake Christmas cookies put in metal boxes when cooled. A few days before Christmas we made marzipan sweets in different colours and with figs and dates. That dried fruit we only got at Christmas together with oranges. The marzipan would be stored away in a sealed box.

A cake container, a gift from my uncle 1944 for my mother, written on the other side: “When everybody always takes the smallest piece of cake, why is it always the one that’s left”?

Christmas Eve is the height of a Danish Christmas. The Christmas tree got decorated at noon by our father while our mother was preparing lunch. That meal was different from other days of the year. We had some bread and things to go with it like always, but then we had rice pudding with butter and cinnamon and a dark sweet beer with it with a low percentage of alcohol. In the afternoon we would go to the church where we sang our lovely Christmas hymns. In Denmark, we have a treasure of psalms that covers the whole year of seasons and church celebrations.

In the evening we would have roast pork, sugar glazed small round potatoes with a sauce, red cabbage sweet and warm salad, Waldorf salad with grapes, celery and walnuts and sour creme. For dessert, we had rice pudding with whipped cream, cherry sauce and one hidden almond for someone to get. The lucky person who got it would get a small present called the “Almond present”.  That’s a custom that’s still used in all Danish homes today. The housewife has to put the dessert in portions otherwise the family would have difficulties in finishing the bowl. One year my mother couldn’t remember where she had hidden the present. She ran up and down the stairs to the cellar and was very upset until she found it. She had so much to prepare, and we thought it was amusing to watch.

My grandmother was touring her adult children’s houses, and we had her company every fourth year. She liked to come to our place as it was quiet. I had an aunt and uncle with four lovely and lively boys.

Christmas with our grandmother 1957

She would sit down and sing all the Christmas songs by heart, some with many verses. In her school time, the pupils had to learn a lot of things by heart.

Our custom in Denmark is to walk around the Christmas tree hand in hand while singing. When we were small, we had to use clothes hangers to help us reach around the tree.  That’s before we get the presents. In my childhood, the lights on the tree were real candles. I don’t remember having heard of fires because of the candles, but we never left the tree while they were lit. 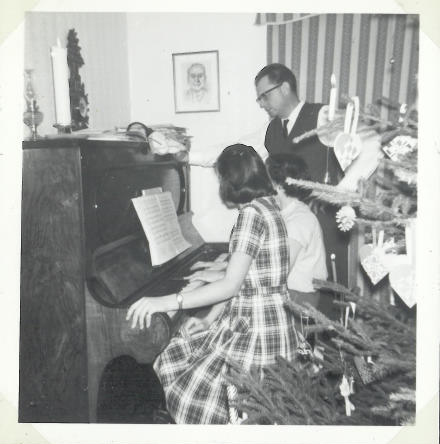 Christmas 1962. Lit candles on the three

At last, we came to the part with getting the gifts. I think we got one gift and then sung another song and so on. I got homemade gifts like doll clothes, a doll bed or clothes. My brother got a fire engine or books or a car later on stamps.

It was a lovely feeling to wake up the next day and play with the new gifts. The only time I was sad about a present was when we were about ten years old and had found the parcels in a cupboard in advance. We peeked into the soft gifts and discovered two duffel coats. Unfortunately, the sight in advance took the magic of Christmas that year. Childhood was over.

The traditions continue. I decorate our home with things from my childhood mixed with newer items and things made by our children. We have turkey instead of roast pork because we are many at Christmas Eve and it has become a new tradition.

The next days were busy for our parents as my father’s sisters and families came to visit. It was a tradition to make Christmas lunches with buffets called “The Great Cold Table”. All shops were closed in the Christmas Holidays, so a lot of planning was needed.

The food would consist of salted herring, scrimps, egg and mayonnaise, liver pate, warm dishes like sirloin, or fish fillets and later fruit salads and cheese. My mother always feared that she hadn’t made enough food as my father’s sister would arrive too early saying:

“We are so hungry we didn’t have any breakfast.”

Sometimes my father would invite them an hour later than usual as they would come too soon.

They would bring presents, and one of them would dress out as Santa Claus. I was very sceptical the first time. It was something we never did ourselves in our family. Before they left on their long way home by bus and tram, they would be treated with coffee and cakes and brandy.

I missed my childhood Christmas a lot when I stayed in England in 1970, the first time away from my parents. I experienced something different, which I am grateful for today.