The Last Rose of Summer

Six years ago my beloved mother died in October. What I had feared as a child just happened. She said every autumn, that she had taken “the last Rose of the summer” from the garden. She was a rose herself. 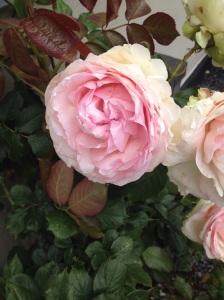 The Last Rose of Summer

Always thinking about us her children and keeping her correspondence with many people all over family and friends. If she didn’t get a letter for a long time she said oh:

“I am so sorry I didn’t hear from that person for a year or so”.

Here is a Pingback to a fellow blogger on someone being remembered as a rose.

My mother never gave up, but kept on writing and sure enough, she got letters back. Now I am able to “see” her as she was when I was small and even further back when she was young during the WWII and fortunately I have all the pictures from the family photos.

The first years after her death I struggled to “see” her only as she was the last months losing her physical abilities so marked by this horrible cancer in the cerebellum.

( I can’t help thinking if the poisonous ingredients at the chemistry where she worked in the forties play a role in getting cancer in the cerebellum.)

This a golden moment in my life

The last thing she was looking at from her window was a red bush like the photo. I am so glad the she imprinted in me the love for people and for foreigners and I want to be as faithful as she was. I have written about her exciting experiences during the war and a life long friendship coming from that time.

My blogging friend from Romania Paul Militaru has allowed me to use his picture of a autumn bush as I told Paul that this type of bush was like the one she had in her garden.

Please have a look at his beautiful photos at his blog.