Small glimpses of my Great Grandfather

A greeting from his sister Caroline for his Confirmation 1880

A greeting from his sister Caroline for his Confirmation 1880

She reminds him to remember his family who loves him and the trust in God for his life.

A picture from his first year at school. William is in the blue frame. The boys wear sailor hats. 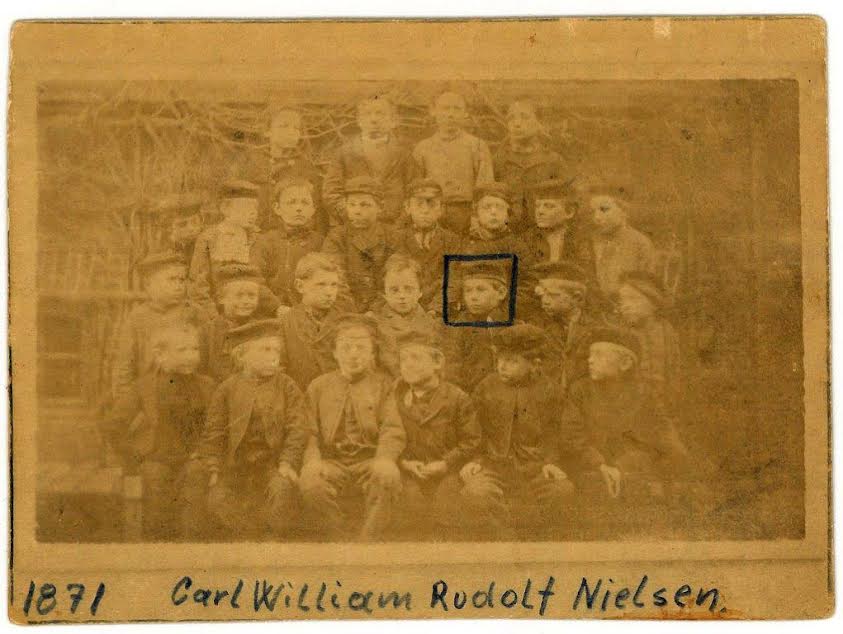 My grandfather i the blue frame. A school picture from 1871. The school was for the boys who’s fathers worked with ship building or in the Navy

This photo was taken at Stjernevej where sister Caroline lived with her large family. The house is demolished many years ago, but the street is still there in Copenhagen.

This greeting card is from his sister Caroline who got a lot of children and many of them died unfortunately.

Nyboder then and now

A photo from Nyboder at the time

William Nielsen lived from 1865- 1926 in Copenhagen. My Grandmother Asta has saved a lot of greeting cards from birthdays and Christmas and for celebrations of confirmation both her own and her father’s. I am so lucky to have them in small fine boxes.

A greeting from an aunt ( in German)

A greeting from an aunt ( in German)

The postal system was very effective. Some of the cards were posted and received the same day as there were several deliveries every day and even one on Sundays. (Unheard of today).

William was born in a famous area of Copenhagen still existing today called “Nyboder”. In the linked post you can see the houses. The rows of houses were built for the people working for the navy building ships or attached to the navy as sailors or of higher rank. The streets had very special names as “Fox street” or “Crocodile Street”, or “Dolphin Street”.

This greeting card is from his sister Caroline . The card is from 1884. I feel I “know” the boy on the card. William’s sister wishes him a lot of good things and that he later will look back at his life with joy.

From his sister Caroline for his 19th birthday 1884 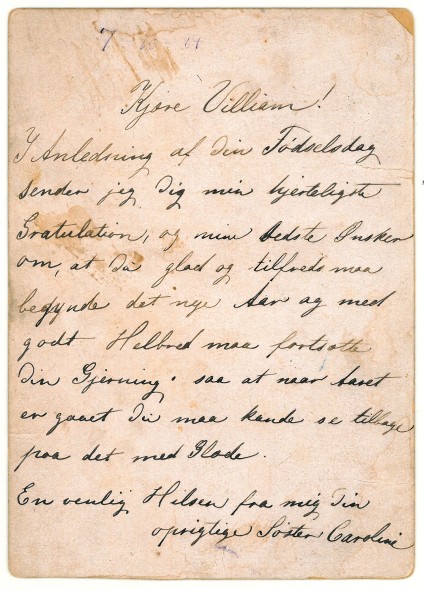 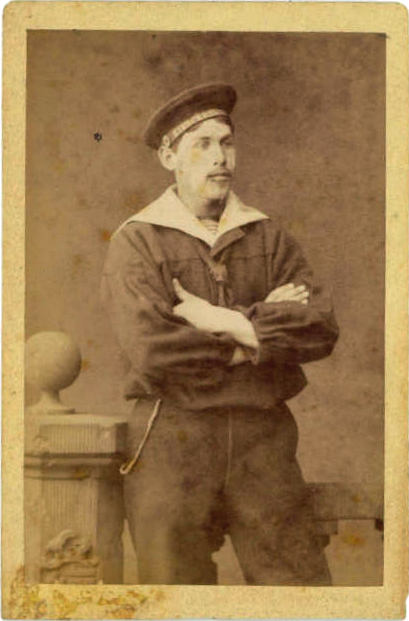 William about 19 years old in the navy

He got married to Laura in 1889 and in 1890 my grandmother Asta was born. They lived in “Hare Street” 11. The house is still there today. This card he sent to his wife in 1897 from Stockholm and the text is like a text message we would send today like when he arrives back home again.

He worked as a carpenter building ships for the Navy

William is writing to his wife Laura from Sweden in 1892

William is writing to his wife Laura from Sweden in 1892

He writes that she is in his thoughts always. They are apart at that time so he longs to be with her.

The front of the love letter, a birthday card from 1987 to Laura my great grand mother

A love letter written as a poem from William to his fiance Laura in 1987. He is 22 years old

His medal of honor for 25 years of faithful service

His medal of honor for faithful service. The King’s signature

His sister’s  Caroline’s wish for him at his confirmation that he would choose to live a godly life wasn’t fulfilled as he left his family and moved together with a woman with whom he got a son. My grandmother was eighteen and her brother was eight years old. This left Laura and the children in a difficult situation. William was back to the family when my grandmother got married in 1919. I have other posts on this issue. I plan to make a post on her greeting cards and old gems from her childhood.