Among the many letters and pictures saved from my mother’s family is a parcel with small baby clothes from my mother’s earliest childhood. She was born in 1923 in a province called Holbaek an hours’ drive from Copenhagen. At her time it would take a lot longer to take that trip.

I would like to show you the content of the parcel together with the photos I have from her early childhood. When I was a small child I begged my mother to get a baby. She insisted on that being impossible and instead I was allowed to see a parcel with my baby clothes. That would serve as a substitute for never having a baby sister or brother.

I don’t remember being shown her baby clothes so I believe that she got it much later from her mother. I washed it gently and took the photos to be able to share them. At the time everything was made by hand at home or by aunts and relatives or even by women who had it as a living to sew clothes for people.

Eva with the apron that my mother remember to have worn 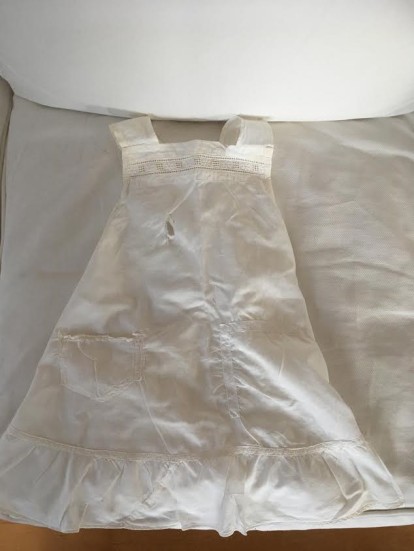 The apron that my mother remember to have had

Unfortunately I can’t recognize the dresses in the parcel on the pictures I have from my mother’s early childhood. But I would like to share them with you as I think clothes were made in a similar way at that time in many countries. 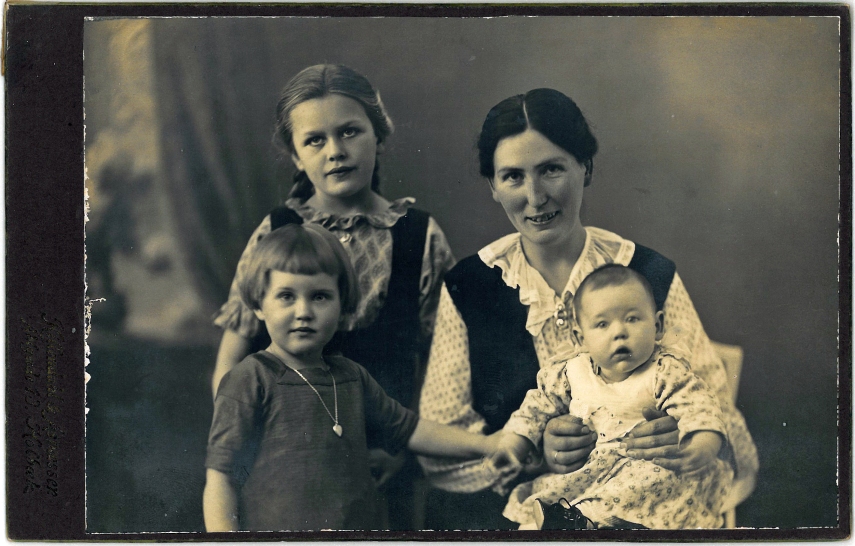 My mother Ruth 6 months on my grandmother’s knee. To the left is Eva two and a half-year old and Ermegaard behind eight years old in 1923

My mother’s sister Eva  one year old in 1922.This dress was not in the parcel I found. 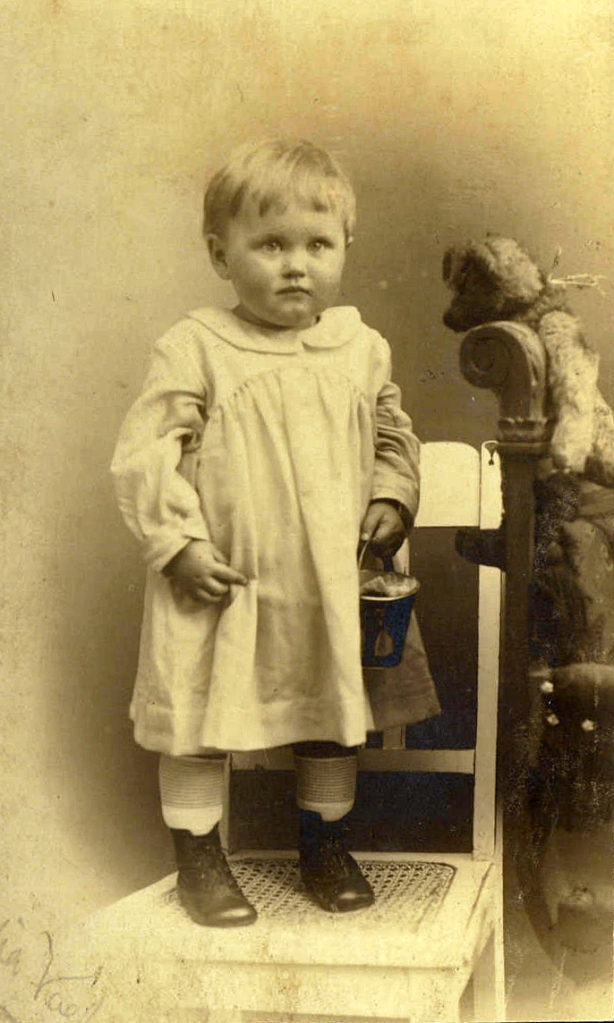 These pictures are from the same small house. It was situated with the train rails behind the garden. Once my mother escaped my grandmother’s attention and the older sister Ermegaard was ordered to run to the rails to look for her. She was found somewhere else. In Danish Ruth rimes on gunpowder which means she was wild. Later she jumped in the deep water thinking she could swim but was again saved by her older sister who grabbed hold of her.

My mother Ruth with her two sisters and her grandmother Laura at the pram. In the background you see the train rails and the hospital 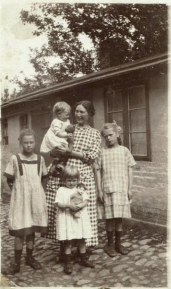 My mother Ruth on my grandmother’s arm. On the left is the “war child” Lotchen from Berlin. Eva in the front and Ermegaard to the right in 1924 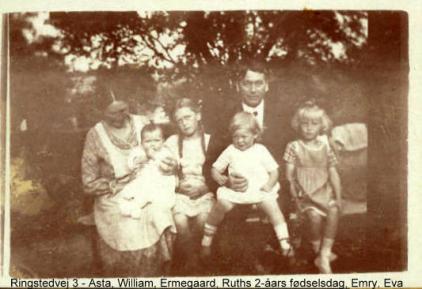 The youngest child William sitting on my grandmother’s lap. My mother is on my grandfather’s knee at her two year’s birthday

Miss Ejby was a friend of my great-grandmother and she made much of the clothes for the children and even the wedding dress for my grandmother. She travelled from Copenhagen and stayed with the family for a week or two and made a lot of clothes

Miss Ejby with the four children. My mother at the right with her doll

Both grandmothers with the children

After the last child William the they needed a bigger house and had this built. Today it’s regarded as a small house. It’s still there in Holbaek.

A picture of the children when the youngest William is one year old in 1926. Ruth at the left, Eva behind and Ermegaard to the right

The new house close to the old one. William is about five years old 1930