In one of her other posts Carol describes how her ex husband was an expert in making their marriage look fine and normal even though she was held in captivity.

Following is from one of Carol’s posts “The Window”:

Pain is not always a bad thing. If experienced often or long enough it becomes a catalyst for action and/or change. I eventually stepped out from behind the window a survivor. Not only was I strong enough to shatter the window, I made a vow to myself to avoid ever being put in that place again…

Carol has suffered from domestic violence. She lived as an American in England during that awful period. She is now safe and lives in the States and does a great job helping other women in similar situations.

She was uneasy about her situation but found a sense of security in seeing the American flag at the American embassy. Carol’s picture of her life’s situation years ago made me think of my relation to our Danish red flag with a white cross.

I was returning home from my first real trip abroad with may class. We had been to Eastern Europe behind the “Iron Curtain” in Prague. Today a trip to modern Prague is a  romantic experience as you can buy anything in the renovated surroundings of Rococo, Baroque and Gothic styles.

Glimpses from our school trip 1967 to Prague 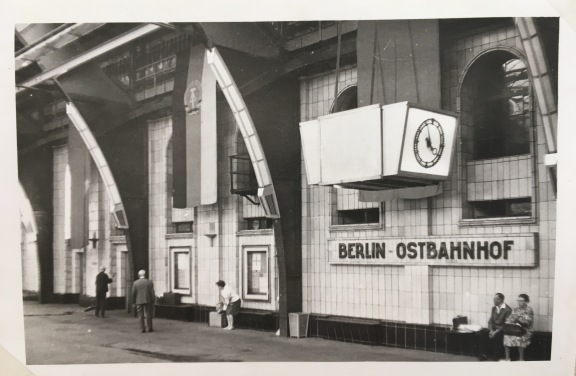 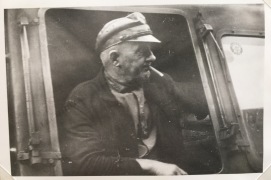 Worn houses along the railway in Eastern German 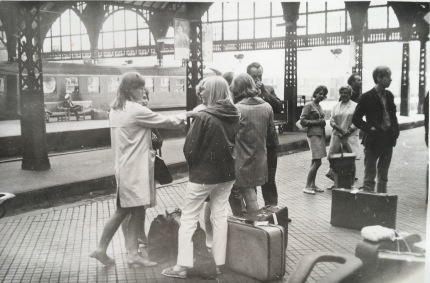 Waiting at the Central Station in Copenhagen 1967

It wasn’t romantic then. People were poor and you couldn’t buy anything worth buying. The officials checking us at the train were not humorous or relaxed. The worst place was East Berlin with a dead and cold atmosphere. People looked pale and thin.

Along the rail roads were huge slogans on posters to be read from the train. All had texts were about “the wonders” of Eastern Europe under Soviet dominion when in fact it was one big prison.

There is a ferry from the East German coast to Denmark and when we reached Danish soil our Danish flag waved from many gardens all over. Normally you don’t see that even though they are still to be seen. But then in 1967 we were 16 years old felt we had come to our safe heaven. We could breathe again.