A book review on Mysterious Builder of Seattle Landmarks

Three years ago when I started blogging I soon found Paula Pederson who blogs about finding traces of her Danish father Hans Pederson who a hundred years ago had built a lot of fine buildings, roads and railways in Seattle. 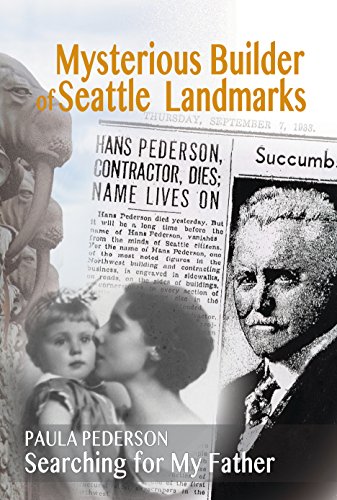 After years of tracing him, her book was finally released February 2017. Reading her book I understand that she found both her mother and her father. Hans Pederson died in 1933 when Paula was only one month old. Her Canadian mother Doris Husklak of Ukrainian origin, married Hans who could have been her grandfather.

From Paula’s earliest memories she finds her mother evading from telling her any truth about her father. Paula was left with a strong feeling of rejection from both her mother and the father she didn’t know. This feeling stayed with her through her childhood and youth making education more complicated than it had to. Finally, before graduation from college, she understood from a teacher that she was bright.

Paula’s mother had grown up in a big family under hard conditions so getting rich and get a good life was essential. Paula got five children which of course was resented by her mother. Years after the death of her mother Paula felt a still stronger urge to find out about her real father and through a lot of research she found that he had been a famous constructor in his time and genuinely interested in the welfare of the citizens of Seattle as well of the many Danish immigrants who came to work for him. He died too early of exhaustion from the many burdens of the big economic depression which made a sudden halt to the great building adventure in Seattle and other places on the US west coast.

When I read about Paula’s thoughts about her life I find it clear that she has Danish roots. Our mentality is the Protestant way of life where you don’t seek to be rich but rather lives modestly and discreet. Her father was outstanding, showing people trust and himself being a trustworthy person.

I admire that Paula’s honesty to let us get glimpses of her life and the complicated family relationships.

My husband and I met Paula and her family in California last week as we were invited for Thanksgiving.  That’s what can happen by blogging.