The World War II Memorial, located on the National Mall in Washington, D.C., commemorates the sacrifice and celebrates the victory of the WWII generation.

One of two WWII Memorial pavilions with bronze wreaths and eagles. They represent the the Atlantic and The Pacific theathers of war 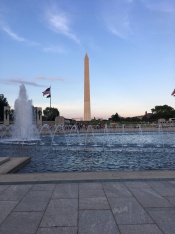 This memorial, completed in 2004, honours the 16 million who served in the U.S. armed forces during World War II, the more than 400.000 who died and the millions who supported the war effort from the home front.

It illuminates the high moral purpose and idealism that motivated the nation’s call to arms and was designed to inspire future generations of Americans, deepening their appreciation for what the World War generation accomplished in securing freedom and democracy.

The memorial is impressive and beautiful, and during the two times I have been to Washington D.C., I wanted to visit it as much as possible. In 2009, the first time, I was lucky to meet a WWII veteran, but this time in July 2018, I saw none, unfortunately.

From the homepage of Visiting the National World War II Memorial

Symbols of America’s triumph in the Second World War are artfully displayed all over the World War II Memorial, which has a splendid fountain at its center. 56 granite columns symbolize unity among the 48 states, seven federal territories and the District of Columbia. The columns form a semi-circle around the memorial’s plaza, with two 43-foot tall arches on opposite sides. The northern arch represents victory in the Atlantic, while the southern arch symbolizes victory in the Pacific.

24 bas-relief panels line both sides of the 17th Street entrance. They depict the many contributions Americans made to the war effort. They deserve to be seen:

Words spoke by presidents and generals.

Today the guns are silent…. the sky no longer rains death- the seas bear only commerce- men everywhere walk upright in the sunlight. the entire world is quietly at peace