More Sights in The National Mall in DC

Last week, I ended my walk at the Martin Luther King Memorial. Very close to that and still separated is The Korean War Veterans Memorial dedicated in 1995. From the homepage of the Korean War Memorial:

The Korean War Veterans Memorial consists of multiple structures that honour those who sacrificed during the three-year conflict (1950-1953) that was the Korean War. The memorial’s mural wall measures 164 feet long and eight inches thick, and from a bird’s eye view, the wall appears as an isosceles triangle, with the tip intersecting a circle over the Pool of Remembrance.

Images of troops moving by sea, land and air are sandblasted onto the surface of the wall, while a squadron of 19 stainless steel figures, including members from each branch of the U.S. Armed Forces, are situated in the centre of the memorial space. When the 1,000-pound statues are reflected on the granite wall, there appear to be 38 soldiers, which represents the 38th parallel, the dividing line of North and South Korea during the conflict.

Washington DC Korean War Memorial, a squad of 19 stainless steel statues. The ponchos are a reminder of miserable weather conditions

The wreaths represent the UN nations participating in the Korean war

Soldiers on patrol in the Korean war

Inscription on the ground 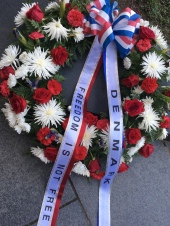 To the other side in the Northern part of The National Mall, we find the Vietnam Memorial. Maya Lin, a 21-year- old student from Yale won the competition for the memorial in 1982. In 1984 a statue of three soldiers was added, and in 1993, The Vietnam Women’s Memorial was erected.

Vietnam Veterans were not welcomed home as the country desperately tried to put the war behind it. Before the founding of the Vietnam Women’s Memorial Project, little was known of the heroism of American women. Yet over 265,000 military women served beside their brother soldiers – all volunteers. Approximately 11,000 American military women were stationed in Vietnam during the war. Ninety per cent were nurses. Others served as physicians, physical therapists and personnel in the medical field, air traffic control, military intelligence, administration and in many other capacities.

The two black triangle walls, one pointing to the Lincoln Memorial and the other to The Washington Monument. The 58,000 names are engraved from the first from 1959 and the last in 1975. 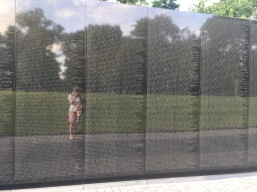 These memorials are so important for the veterans and their families and for those who lost family members, to have a place to go and to see the names of a loved one.