I am far from finished sharing sights and photos from a trip this summer to Massachusetts, Philadelphia, Washington DC and Virginia but as I have just returned from London, I would like to show you a few sights where Hyde Park Corner and Green Park meet. I took part in a big Half marathon in the Royal Parks and pasted by war memorials at the race.

Wellington Arch built between 1826 and 1830 by D.Burton, is impressive with Adrian Jones’s quadriga sculpture, which was erected on top of the Wellington Arch in 1912. While Henry and I walked about in the area on our last day in London, the Queen’s horse guard passed through the arch. 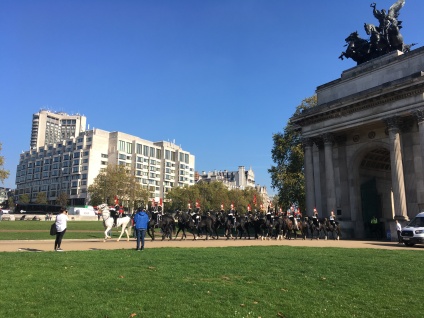 2018 marks the centenary of the end of World War One so I will start at The Royal Artillery Memorial commemorating 49,000 who died in “The Great War”. C. Seargent Jagger (1885-1934), the sculptor was awarded the Military Cross during WWI and his experience is evident in his much criticised realistic depiction of the brutality of war in the stone reliefs, the life-sized copy of a howitzer in Portland stone and especially the poignant bronze of a recumbent dead artilleryman covered by a greatcoat which partly overhangs the inscription. (The text is from a leaflet called “Remembrance” found at the Wellington Arch ten years ago.)

In 1949 bronze panels were added for the effort and losses of the Royal Artillery in WWII. Unfortunately, they were impossible to catch on my camera.

The next war memorial for Australians inaugurated on Armistice Day 2004. It’s situated close to the first mentioned. That memorial also commemorates both wars. From the homepage for the monument:

More than 300,000 Australians from a population of less than five million would serve in the Great War – World War 1 – which lasted for more than four years until the German Army surrendered on 11 November 1918. For Australia, the cost was high – more than 60,000 soldiers were killed and a further 150,000 were wounded, gassed or taken prisoner.

As part of the British Empire, Australia was among the first nations to declare war on Nazi Germany and between 1939 and 1945 nearly one million Australian men and women served in what was going to be World War II. They fought in campaigns against the Axis powers across Europe, the Mediterranean and North Africa. In 1941, The Japanese Imperial Navy attacked Pearl Harbour and advanced into South East Asia. As a result, the Allied powers including Australia were at war with Japan as well.

Most tourists pass by these monuments without noting anything about them. How I wish that we could live on earth without having to sacrifice lives like we have done.