A Flash Back to a Lone Swimmer from 1937

Today I ran across a fellow blogger’s extraordinary blog the LoneSwimmer on our common blogging course Blogging 201 and my thoughts went back to the year 1937 in Denmark. My mother was fourteen years old and admired greatly the five-year older swimming star Jenny Kammersgaard. My mother followed the radio report on a special long distance swim from Griben on Zealand to Grenaa in Jutland in 1937. No one had dared to do what she did on that distance. The swim took her 29 hours and the distance was 42K. The press photo is from the start of that event. 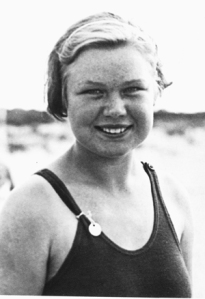 press photo from the start of this swim in 1937

The same summer Jenny went past my mother’s home town Holbaek and for that occasion my mother stood at the train station and managed to hand over to Jenny through the open window a self-made poem and a bouquet of flowers. The episode is documented in the local paper. She must have borrowed her father’s typewriter!

My grandfather Emry wrote his Memoirs and the poem and the little note from the newspaper have been added by my husband who has digitalized it. My mother writes in the poem something like this :

While I am sitting in the shades of my plum-tree I am writing this. Yesterday I took part in a swimming contest with people of mediocre swimming abilities.

How the news speaker doubt that Jenny will manage to reach the coast as the current led her away North East of her destination, but Jenny had loads of energy and got her victory. 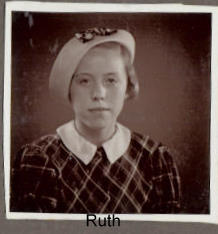 My mother Ruth at the time about 1937 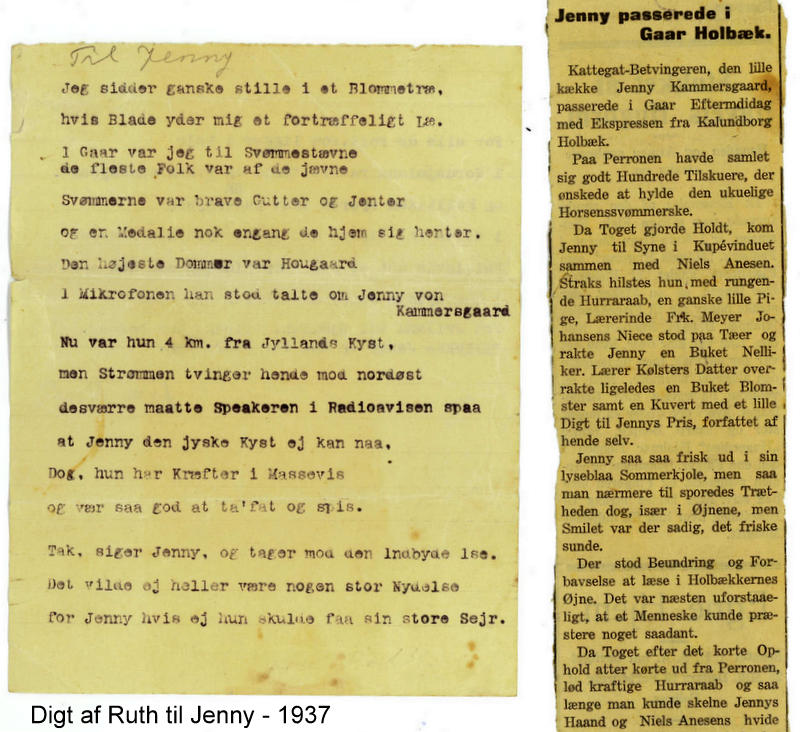 press photo from the start of this swim in 1937

Jenny at the moment at the Holbaek station in 1937

Unfortunately Hitler sent her greetings on her great achievements and it was used against her. But it showed after her death that she had worked as a courier for the Resistance during WWII.