Let the scene write itself

Today I was reminded of a task in one of our recurrent online writing courses. Write what you see for twenty minutes when you are visiting a cafe or a similar place.

I was waiting for my appointment at my hairdresser. By the way I am so thankful for her skills as she is the second good hairdresser in my life.

I like to look at a women’s magazine in the short time of waiting. I never buy them myself so to see the latest of fashion or to read an interview is fun. I like to see the trends of fashion that I have known before coming again to new generations with another twist of something. While trying to read a toddler was screaming while having his hair cut. It was a regular fit like he was losing his mother or in deep pain. He was held by his mother whose voice was hardly heard. The hair dresser cut his hair in silence like a routine thing. I was thinking that this was a normal thing that small children go through but at the same time I felt that the boy could have some problems in his building of relationship with his mother. Somehow he was too grown for such a dramatic reaction. The hair dresser later told me that this boy was reacting  like that at each visit. Had the mother asked me for advice I would have told her to prepare him and to tell him how she expected him to behave and then to talk supportive to him during the haircut. 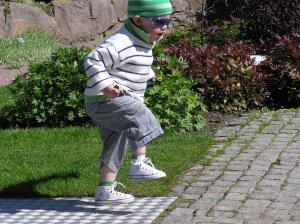 A happy toddler seen in Gothenburg in Sweden

Quiet came back after they left and I overheard the conversation between the young woman and her hairdresser beside me while having her hair done. She was not very talkative so the hairdresser asked many questions on her life, studying and student’s flat. She had only lived away from her parent for six months and enjoyed it now and would never move back home. I immediately remembered how lonely I felt for a long time having moved to the nursing study room at the hospital many years ago.  Her older brother had been on a study visit at the Harvard university studying foreign law and economics. She stated that studying economics was in the family genes. She and her four fellow female students had been up the night watching the Oscar awards festivity. The hair dresser had just asked her what she was going to do on the rest of the day off ?

She was going back to sleep!

Overhearing that I couldn’t help laughing as I and the two hairdressers probably wouldn’t sacrifice our sleep for watching the Oscar celebration. I was impressed by the hairdresser’s ability to get a sleepy young woman to share so much of her life.

My hair dresser is just as good an interviewer she had me tell her of all the time I spend on my three blogs and how I am occupied just now on writing my memoirs. She thought that was a funny thing to do and I told her that much has never been told, not to my children either and that I was writing for them and the grandchildren if they never ask me about it. And I told her that I felt it strange that they hardly ever “liked” it when I shared the posts, but who knows maybe they still read it. I am thinking of finding a way to have it printed in a nice way with pictures. There must be a way to do that.