My Grandparents’ Trip to Paris in 1950

My maternal grandfather Emry 1881-1958 wrote his memories and they are a gold mine in regard to diving into a distant time. I was seven years old when he died.

The trip to Paris in 1950 was the first travel abroad for my grandmother and my grandfather’s second. He went to Germany in 1922 with his brother and brother-in-law at the time where the inflation was escalating.

He had studied brochures and taken a French course to be able to speak French at the journey. My grandfather was a school teacher and a parish clerk so they even needed someone to receive the phone calls at home. He had for many years kept the records of births and deaths in an area of Holbaek, a province town 60 km  from Copenhagen. This job and the WWII had kept them from travelling abroad.

In 1950 it was such an event that they were going on a holiday that a large part of the family and friends went to Copenhagen to send them off by the bus. My grandfather was very impressed by the driver’s way of navigating on the long way to Paris and back. My grandparents got to know some of the other passengers very well and had a great time during the two and a half day’s trip to Paris and back to Copenhagen. Some of the travellers were Swedish they are often very shy and my grandfather had to give up at contacting them as they refused to understand his attempts to talk to them.

They had to pass through customs many times to have their passports checked. Through Germany they passed by ruins every where. Hamburg was one big ruin but it seemed that people were in good spirit and lots of new housings were being built.

Emry describes Holland as well-organized and nowhere were windows and curtains so clean and gardens so neat as in Holland. Longing to arrive in Paris they entered France and passed by enormous cemeteries with endless rows of crosses. Farms and houses were lacking repair.

The sights that met the bus company driving through Hamburg

Bicyclists in Holland at the time of my grandparents’ travel

My grandfather’s handwritten map of the tour

In my grandparents’ foot-steps- Hotel Select some years ago

At last in Paris. Rue St. Michal, Palace de la Sorbonne, Hotel Le Select which is still a hotel at the left side of the Seine. The breakfast was the French long bread, difficult to chew  with their kind of teeth, in addition rancid butter with it. My grandfather didn’t mind but I don’t think my grandmother was pleased with that.

One of the restaurants where the company liked to eat. We could not trace that place in 2010

We found the menu in my grandfather’s scrap-book

The Menu from the trip. My grandparents liked to food that was easy to chew

The first day they took a tour with their bus to see the sights and later on they were on their own to try to find just a few of the sights they wanted to see again. They were offered a night trip on their bus and nobody declined that offer. The trip would start at 9.30 PM and cost 2000 Francs. I have not been able to look up what that would be in our money.

We didn’t have a metro in Denmark at that time and it took some time for the travellers to get used to the system.

At the time in 1950 there were 14 lines in different levels under the surface and at both sides of the Seine. To find the exit was the easy part. Just look for “Sortie”. My grandmother was impatient and wanted to go quickly which resulted in choosing the wrong direction twice. A lot of stairs up and down to get back to the first platform. In the end my grandfather had to use all his authority to get some peace and quiet to be able to study the route and write it down with the places where to change line. The errors were repeated every time they travelled with other couples who also were very “clever” until all travelling plans were given to my grandfather. They lost two hours that way the first two days.

He concludes the Metro story by telling that it’s a good thing that you get around the whole day for the same 20 Francs!

My grandparents and a co-traveller at Rue Rivoli

Emry describes their first choice on their own was Louvre! Here they found people of all colours, something unheard of in Denmark at that time. They followed an Indian royal couple with a little girl dressed in white and with a diadem on her head. The parents were clothed in beautiful Indian style. My grandmother couldn’t resist giving the girl a piece of chocolate. They met lots of catholic priests from a distant place and they reminded him of teachers and pupils from the province visiting Copenhagen.

“The Absinthe drinker” by Degas

Famous paintings from the beginning of last century

The company was quite excited by what the tour would turn out. The bus took them to Montmartre  and they entered three different dancing clubs with women dancers with very little clothes on. Sometimes the company got up for dancing too, especially the younger women were asked to dance. My grandfather danced with one of the women from the tour at one place. The dance took nearly twenty minutes and my grandfather stood it out. Before my grandparents returned to Denmark the rumors had arrived by airmail to my fathers’ workplace where he overheard two young women telling that a parish clerk from Holbaek had danced with the mother of one of them in Paris!

At one restaurant they got Absinthe which was a very strong drink. The women didn’t like it so my grandfather took their drinks without being affected. Two of the young women in the company got too much to drink and my grandmother helped them to return ALONE to the hotel at 6 o’clock in  the morning.

Emry describes how they went to a famous market. On his way to the market Emry came last and received no less than five invitations to go inside with woman standing at the entrance of their flats in Rue de Budapest. He kindly declined the offers in French and they soon looked for other gentlemen to invite to their place.

From our travel in my grandparents’ footsteps

detail of photo of my grandparents at Rue Rivoli

Buying small gifts at the famous La Lafayette department store was a great thing for my grandmother to do. Emry  and Asta saw Paris for the first and the last time in their life. He wrote a lot more but I am not able to let the words live like they should do. If you would like to read how they met in 1919 it’s here in two blog posts. 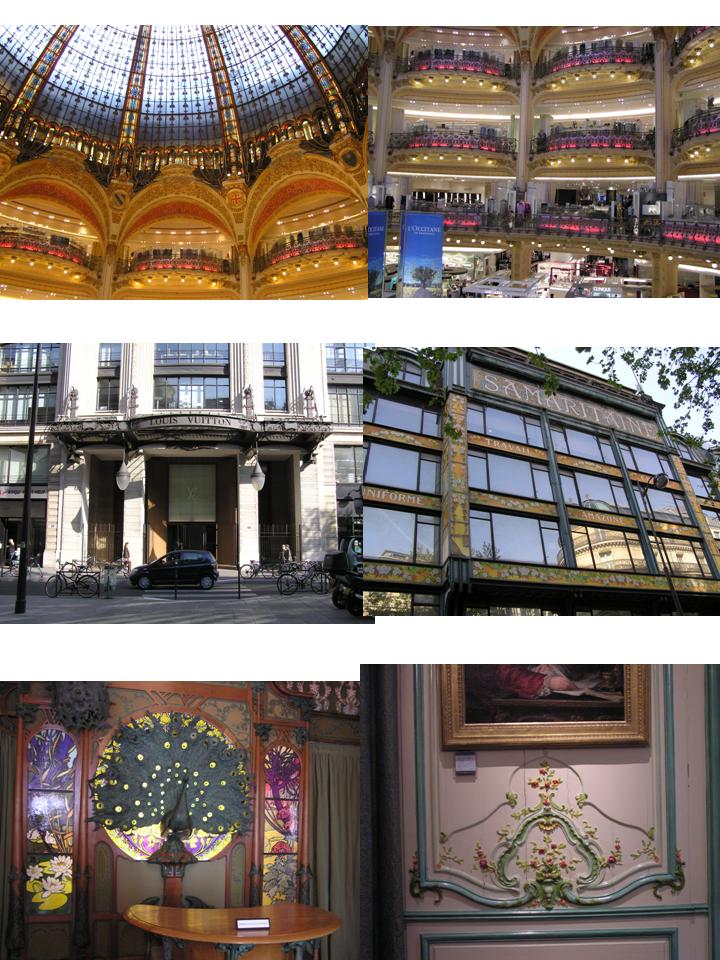 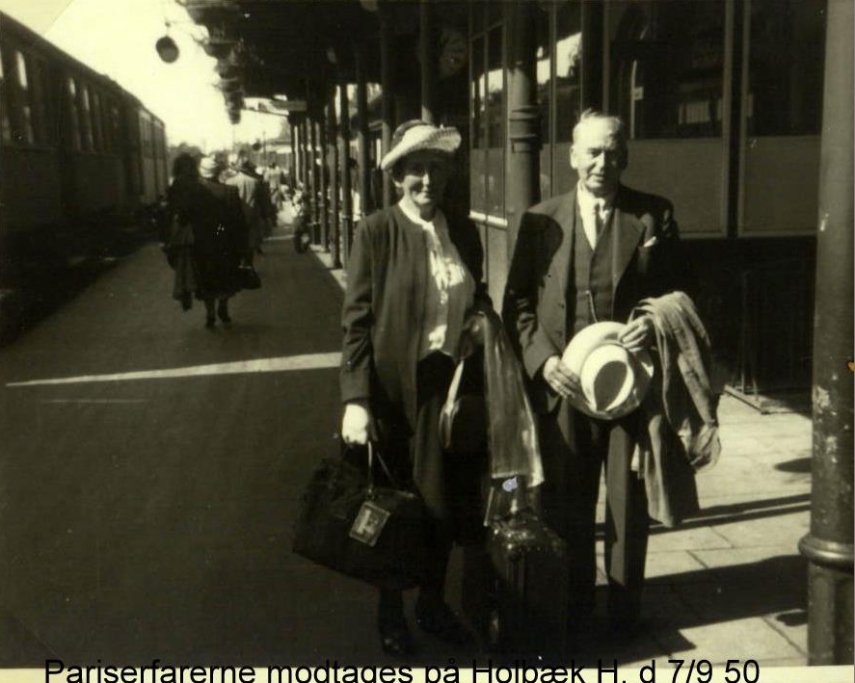 Returning to Holbaek in September 1950

In June 2010 my husband and I took a trip to Paris where we tried to find as many sights as possible from the 1950 trip. At the Rue de Budapest nobody would stand in the door openings anymore.  We might go again just to try to stay at the “Select”hotel at the left side of the Seine, La Rive Gauche but I would never be tempted to go on the night tour.