The Daily Prompt from the Daily Post from WordPress can be a help in times of lack of inspiration.

I very much dislike to lose things or to break them. I was brought up in a time where new things were seldom bought and if I really wanted something it would mostly remain a dream. Most things I own are precious to me. Something chosen and of worth.

I had a glass bowl from my first marriage in 1979. I don’t remember where I bought it or what make it was. I took it with me when I divorced after nine years of marriage and three moves later. It was with me in my years in Sweden and then back to two different homes in Denmark. This Christmas I had made our traditional dessert “Ris à La Mande” a rice pudding with almonds and whipped cream. (The recipe in the link is in English.)

I hat put it outside as our refrigerator is too small. As I wanted to take it in it somehow slipped out of my hands and landed in thousand pieces on the ground.

I have other glass bowls but they are not important to me. I could give them to a second-hand shop and never miss them. I put a picture of the bowl in a Facebook group and just as I wanted to write about losing or missing things I got the answer that the bowl is still made and it’s a Swedish firm “Swedish Crystal” . Vaguely I now remember that it was Swedish. That means I can either order it or look for it on travels to Sweden. What a lovely feeling. 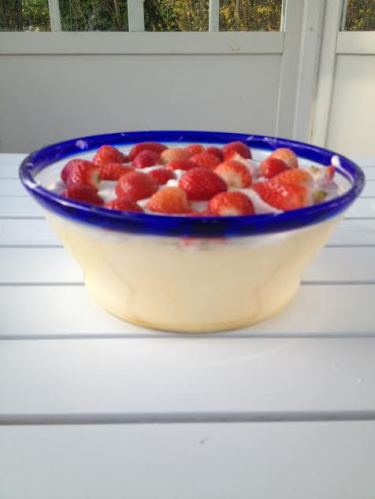 It’s not so easy to make as the gelatine has to be treated carefully (lukewarm) so that the dessert will not be spoiled. You whip sugar and egg and add lemon juice. You add the fluid gelatin and mix the whipped cream.

Here a recipe from Arla.dk

I only use good ingredients and if possible all organic.

My daughter has not inherited that characteristic of mine being too attached to things. She sells her belongings as soon as she doesn’t need them anymore.

I might return on this issue on how to trace lost and loved things as the most treasured belongings sometimes disappear from me like ear rings, woolen hats and hair clips. All valuables.