My aunt’s four boys, my cousins 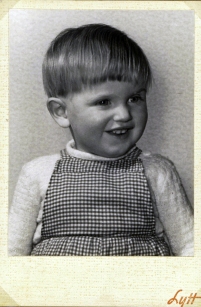 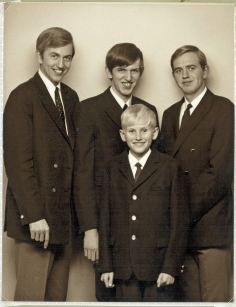 Born in 1921 Aunt Eva would have been 95 years old today the 4th of February had she been alive.

My grandmother Asta and her firstborn Eva, May 1921

As a child, I admired my mother’s sister Eva. She was full of humour, and she had four lively boys. Three of them a bit older than me and one six years younger. I always dreamt about getting a little sister or brother, so it was great that she got a baby when my mother didn’t.

From the left, my mother Ruth, brother William, Aunt Ermegaard and behind and beside them aunt Eva.

from the left my mother Ruth, Eva, William and Ermegaard

The sisters Ruth and Eva liked very much to dance and knew many dances via their dancing lessons. 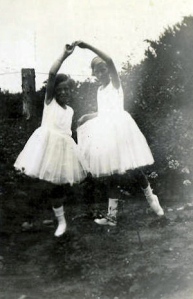 In their youth, even during the war she and my mother took their bicycles and went through Denmark to see families and sightseeing.

Peaceful pictures from the war in the 1940s 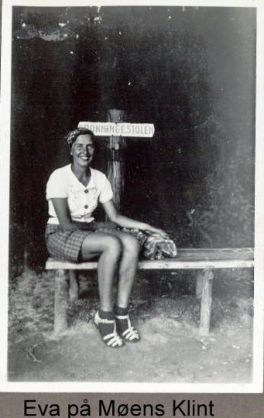 Eva on the bike 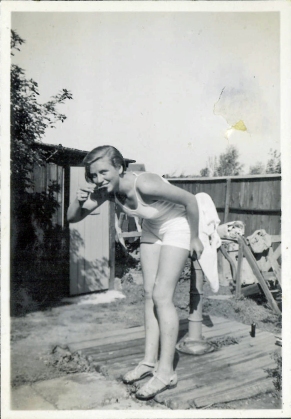 Eva on her bike

After school was finished, Eve started to work for a family with children. You had to do that before being accepted to a nursing school. She studied nursing at the beginning of the war at the hospital called Bispebjerg. I did the same some thirty years later. 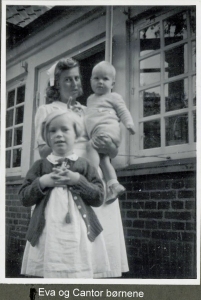 Eva as a young lady

Eva during the war or just after

Eva as a young teenager

Eva during the war 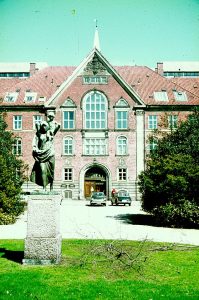 The entrance to the old Bispebjerg Hospital

During that time she met my uncle Hans and got pregnant. They married in the autumn of 1943, and my oldest cousin was born in May 1944.

At the time it was impossible to study nursing and to be pregnant even if you got married. Aunt Eva never finished her education but stayed working at home and later helped her husband in his firm. He was among the first here in Denmark producing things in plastic. It was told about him that he hired a place for production and then went around on his bicycle and sold his goods. I guess mostly toys.

The blue bathtub might have come from his factory

The firm is still existing in another country. They make things for street lamps and lamps for highways and many other items for the industry.

Many firms can’t make money in Denmark because the salaries are so high.

In my childhood, my mother told me how she was trying to get some milk for the little two months old nephew.  In July 1944 a general strike had broken out in the big cities in Denmark.  People were angry at the Germans who had started to execute the young resistance fighters. Later Eva’s husband Hans Nielsen was in prison at the Shell House mistaken for another of the same name. He was transferred to another prison just before the bombing of the Shell House where the Gestapo had their Head Quarters and all the files on the resistance movement.

My mother had just come from the province to Copenhagen to start a new job in a pharmacy. She couldn’t begin that day in July 1944 because of the strike and tried to help my aunt to get the milk for the baby.

Pictures from later in the war March 1945, RAF bombings of the Gestapo headquarter Shell House in Copenhagen. 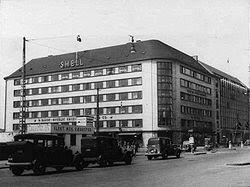 Shell House before it was bombed in March 1945 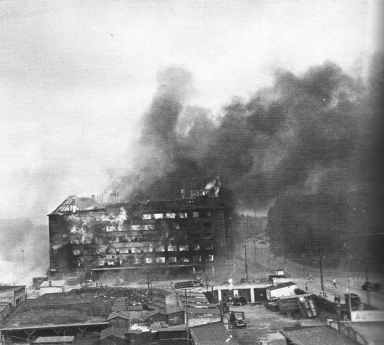 When she came back with the milk, her sister and the baby were gone. They had evacuated to a summer-house. Luckily they found each other but it was trying times, and communication was not as now.

Also, my uncle was released after some months, and my aunt even dared to knock at Gestapo’s door to ask for her husband. Hans was lucky to be able to speak German, which helped him immensely.

Back to my childhood in the fifties

Aunt Eva would shout at my cousins, and they would laugh on their way out to their soccer games. I was not used to such a noisy way of bringing up children.

Once she took care of my brother and me just for a day, and I walked with her for some shopping. I was six years old and saw a shop on the other side of the road with baby carriers, and I wanted to see the display of baby carriers for babies and for dolls. She didn’t have the time though and drew me away in my sleeve.

I knew then that my mother would have let me have a look. Her star fell a bit in my eyes because of that. But at another time she invited us all for her birthday and we got warm cocoa and homemade buns with butter and most likely some more with it. The 4th of February was always cold and snowy. There was a lovely smell all over the house and lots of happy voices. I hardly ever see my cousins anymore, and my aunt and uncle are dead long ago.

I ended up having four children myself and was lucky to finish nursing education a long time before I got my children. 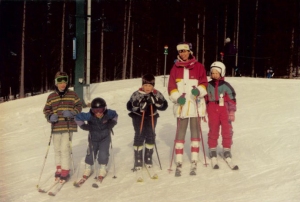