E.M. in Triathlon in Herning Denmark/ a half “Iron Man”

was held in our home town Herning this weekend. My husband and I had the privilege to have been hosts for Robert Bacon a top athlete from Scotland. Robert booked us via the Airbnb app*.

*The international firm Airbnb has a homepage you can download as an app on your phone or tablet. It’s possible to book a room or more through that quite cheap and we as hosts don’t have to advertise or handle money. We just put up a page with descriptions of our rooms and services.

It seemed that we quickly got to know each other. The weekend before Robert had done a similar race in Slovenia where he injured his arm, but made it through. His special bicycle is transported from race to race by airplane and Robert has to check up on its condition as the luggage people don’t always handle it with care. Robert would arrive late at night and to show me what to expect in the morning he had sent two pictures from the race in Slovenia. As he said in the mail he would be silent as a mouse and he was. Just to thank me for allowing him to come so late at night he had brought my favorite English camomile tea and biscuits from his hometown.

Preparations the day before the race

The bicycle is being checked from after the flight

Our guest has done his swim test the day before

The start area the day before

I run five times a week continuously training for Half Marathons. This race was a half “Iron man” which starts with 1900 meters swimming, 90 km bicycle race and ends with a Half Marathon 21.1 km. To train for that would cost me the time I use for blogging.

The Race or as much as we watched it 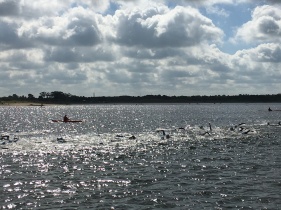 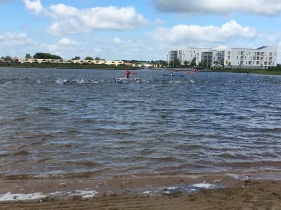 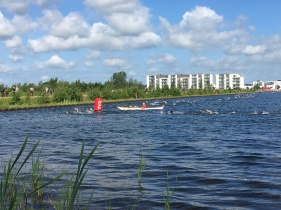 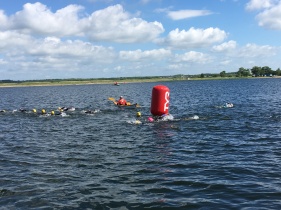 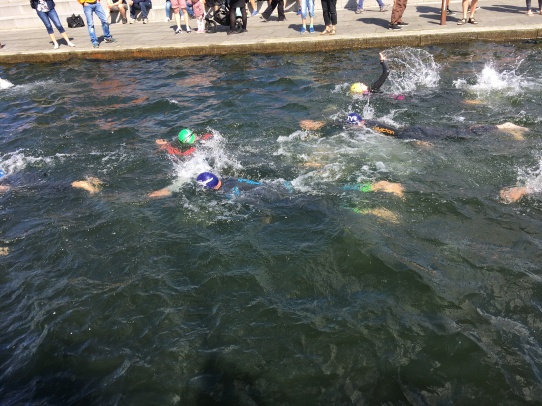 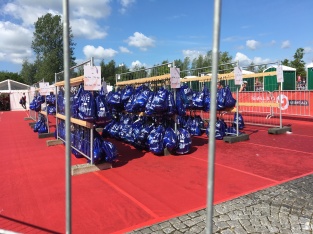 The wet suits hanging after the swim

First goal accomplished for some at the Challenge Herning Triathlon 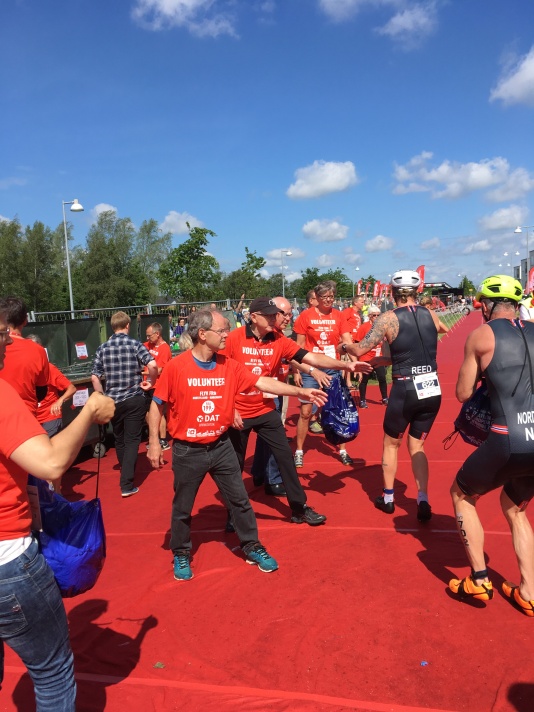 The wet suits are given to volunteers from my running club

At the lake the helpers were placed in canoes and on floating boards in the water to watch if everything went as it should. I suppose that there were helpers driving at the bicycle route to check up on the cyclists and ready to help in case of emergencies or defect bicycles or even worse crashes. The athletes had their bikes close to the water front and they quickly got their wet-suits off and put in a blue bag handed over to the ready helpers. The athletes ran barefooted to get their bikes where the special shoes is fixed to the pedals. One girl got on her bike before start and was shouted at. For spectators and supporters there is a lot to see at such an event and it’s easy to start dreaming about being able to train for it and see how it feels.

You will need a good bike, a wet suit and a lot of hard training in all three disciplines.

The participants looked so tough with their race numbers glued to their arms and legs like tattoos.

I was so impressed by Robert’s discipline in eating habits, checking & packing all his stuff and being on time for every detail in the race. I believe it benefits you to have tried a certain kind of sport many times to avoid accidents and errors.

I made Robert a juice from beetroot, ginger and apple and he politely claimed that he ran faster because of that. When he returned to our house after the race he had to find the food I had prepared for him on his own. Everything just felt so natural as if we had known each other always. I regret that I didn’t serve him more coffee. I had put the full coffee pot at Roberts place at the table but forgotten that in Great Britain the host serves the guest where as here we expect the guest to help himself.

Leaving our house and the grinds left in the town

Packing for going home. We miss you already 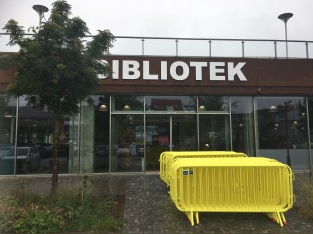 At the library the day after the race

At the museum the day after the race

We would have loved to watch the event the whole day but had to leave for a family gathering. Robert had to finish without us cheering. The half Marathon was a city run four times the same route through the pedestrian street, inside our central library and out in a green area and park and back to the city center. Robert did his best Half Iron Man here in Herning  having just done one the week before! Robert told us:

Seeing the big clock at the last time through the library I realised that if I hurried up I would finish under five hours! 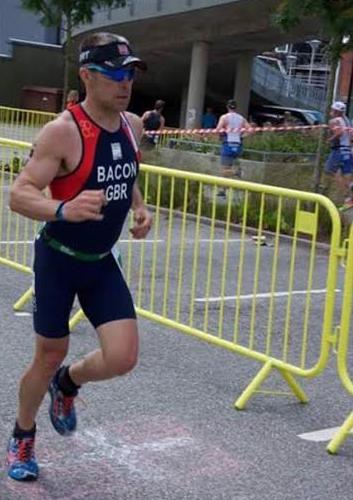 I guess it was good feeling to finish. The weather was lovely which isn’t anything to count on. The day before it was pouring down and the day after just as gray and rainy.

Robert after “running sightseeing” in Copenhagen the day after the race

We have become friends through this event and Robert will help me to find Half Marathons in his area in Scotland that I can try in the future. So far I have to let go of the dream of swimming and cycling so far.

I am reminded of my parents who in the 1960s were showing their home to foreigners though a tourist organization in Copenhagen called “Meet the Danes”. They also made friendships that they cherished through my mother’s faithful letter writing. Nowadays we use the easier methods of emails and Facebook.

When I passed the lake while the athletes were swimming I saw some curious cows. They are keeping the green area to prevent it from being overgrown.

curious cows at the lake