Show your world – our new library

My fellow blogger Yulia a from the blog Tiny Expats has this blogging event and I would like to take part in that event.

Our libraries are totally different today. I remember libraries as very silent places with rows of bookshelves and small boxes for the small children. I liked very much to walk around and look at the titles as a child and young person. The people working then did everything that had to do with registering of borrowing and delivering of books and long queues appeared frequently.

A similar post to this can be read from Nadyas’ blog called unanimuse and has a series on the subject daddy and libraries. One post is called “All smiles at the public library” and she inspired me to write this one. Thank you Nadya!

I would like to show you our new library in Herning Denmark. Originally the building was housing a grocery shop and it was the ugliest kind of architecture you could imagine. It reminded me of the bombastic communistic style from Russia or East Germany during the cold war. The building is still kept in a very raw style especially inside. Here in Denmark, the minimalistic style has been in fashion for many years.

The city council wanted to move the old library from the periphery of the city to the centre and it was decided to use this ugly grey concrete building. The inside was removed and the outer walls got a real makeup with window glass in blue and green colours.

Inside there is a nice café with long opening hours and a lot of space for people to gather for many purposes. Young students sit around in groups or alone with their laptops or iPad. One area is a silence area where the internet can be used on the computers owned by the library ready to use. Most people have their own computers, but sometimes it’s nice to sit among others and work in silence. 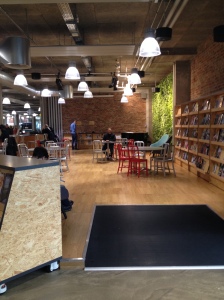 A corner of the café

There is an area for newspapers and magazines where a grand piano is placed for small concerts and a scene for talks. Before the library was moved it was popular, but I must say that people of all ages and gather here at the new place in crowds. You check your books in and out yourself and the librarians are available for questions about material for many hours. When the people working here go home in the evening the place is still open some hours and you use your health care card with your id information on to open the outer doors.

I would prefer that more areas were more silent, but I guess I am old-fashioned.

A huge area is reserved for children with playground areas placed on low bookshelves that give the children appetite on finding books on their own. 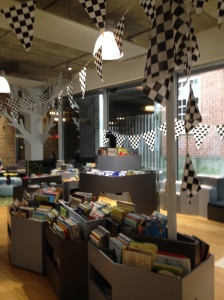 Prams or baby carriages at the children’s corner

Playground at the children’s area 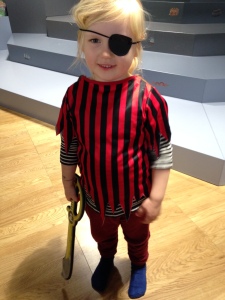 A “pirate” at the children’s area

Groups of young mothers gather here and talk about their babies. For many years I have put such groups together in my district as a Health Visitor, but nowadays people find each other easily via Facebook or on other social platforms.

I will not forget the books. In the middle of the huge ground floor, there is a wide staircase to the “Deep” as it’s called or a play on words with absorption.  That’s the basement where most of the books are and restrooms. 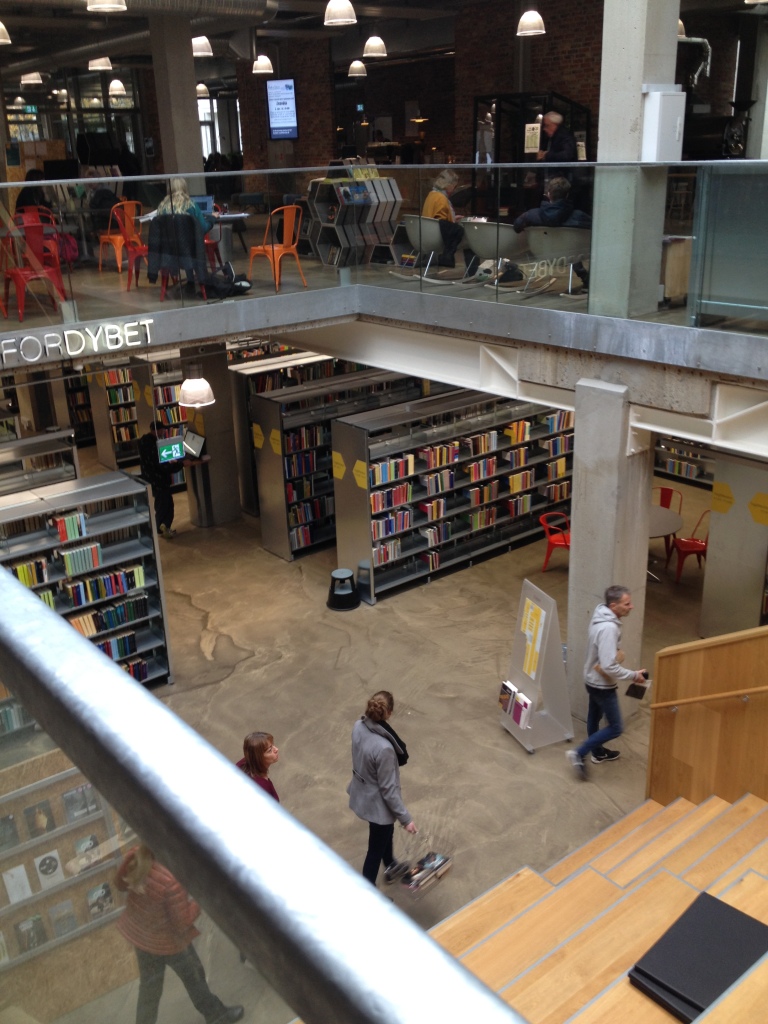 “The Deep” with all the books

I think the future brings more and more eBooks and music and film borrowed from the internet via the library which has influenced the way the interior of the libraries are arranged.

How do your libraries function?