I was asked by Irish writer and editor Danielle Barron to contribute to this EU campaign on this important task. The campaign runs every first week of October to create awareness for healthy pregnancies and safe motherhood.

This year we are seeking prominent health bloggers on the topics of pregnancy, motherhood, and maternal health, across Europe, to work with us on our campaign. I think the theme of the campaign – that every mother deserves a positive motherhood experience – ties in nicely with the wide range of content on your site.

I gladly volunteer to write on this subject that has engaged me since the late 1970s.

This will be divided into three different blog posts. I am Danish and I live in Denmark so the perspective will be how things are here in a Scandinavian country.

My parents got married 1948 and in January 1951 she gave birth to twins two months prematurely. She claimed that there was more than one kicking inside her but the staff knew better! 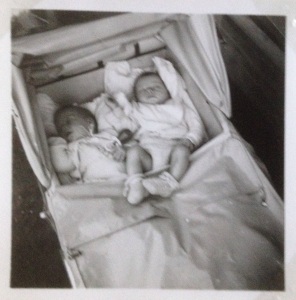 She was right about the twins. Imagine the shock that you haven’t prepared anything for twins. At the time few years after the ending of WWII, everything was scarce. Food and clothing were rationalized.

During her pregnancy, she suffered from hyperemesis gravidarum which is the most severe form of pregnancy sickness. After some months she was admitted to a hospital where she was sedated with Fenemal and spoon fed by the staff. I have thought many times about the possible side effect of Fenemal. Many years have passed but I am not sure that treatment for this kind of suffering has improved very much. Many are still left alone about being so sick for the first four months and some suffer the whole nine months of pregnancy.

Here is a link to an admirable charity organisation, “Pregnancy Sickness Support”  that focuses on supporting pregnant women who suffer from this sickness. Hopefully, the illness will be regarded as a somatic condition and not emotional as many still believe that the cause is.

My mother didn’t have a lot of baby clothes and often she washed it by hand. The diapers were made of cloths and were a great job to keep up with. I mention that so that we can be thankful today for our washing machines. 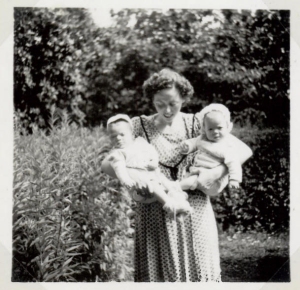 My mother loved to be a mother and cared lovingly for us. She reacted to the things she had gone through by being over protecting us. She was afraid of us getting infections like polio. We weren’t allowed to stay overnight with friends in a tent we could become ill! I never reproached her for that as I already knew then that she couldn’t help it.