To get a grasp on how to get to know San Francisco, Henry and I got on one of these circulating tourist buses that are available in most big cities. After a while we got places and headsets to hear the information about the city. Suddenly this huge beautiful Grace Cathedral in Gothic style stood high above in the street. I didn’t catch at once what it was. Later the same first day we passed it again and I then understood that it was quite near to our hotel in Taylor Street. I have another post on this type of church from London. 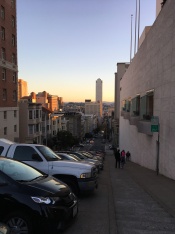 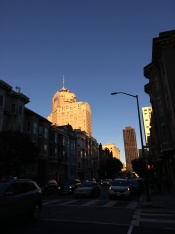 Surroundings close to the Cathedral

My way to Grace Cathedral, at California, from Taylor Street

I was touched by hearing about the horrible earthquake and fires that hit the city in 1906. A long street, Van Ness Avenue full of fine houses were sacrificed to stop the fires from spreading from West to East of the city. Van Ness Avenue is now the widest in the city.

A wall painting at one of the isles inside the Cathedral 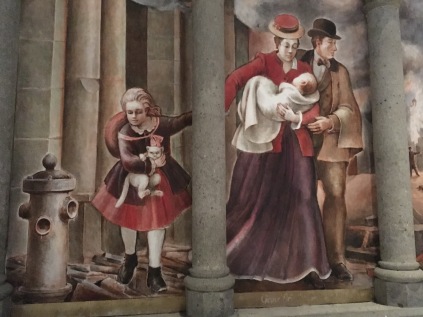 Detail form a wall painting about the fire in 1906

From the virtual San Francisco Museum:

The Grace Cathedral became a ruin that fateful day in 1906. It’s situated at Nob Hill on California Street. The second day I walked up the hill from our hotel to be able to see it. I was impressed to see the way the cars were parked on the steep street leading up to the church from Taylor street. I would never dare to drive in such a street. I had to leave Henry at the hotel as his amount of walking was passed long ago that day. I managed to see some highly decorated military persons walking away as they had just had their annual Veterans’ Day Memorial. I was glad that I was able to come in and see the church decorated with thousands of red flower petals.

Opposite the cathedral is a lovely park called Henderson’s Park. The Henderson’s had a mansion at that block which was destroyed in the earthquake and fires and the widow donated the land to a park. It’s mentioned in the Wikipedia article about the park that only the stonewall around the park survived and burnt marks are still visible. I will have to go again to have a look: 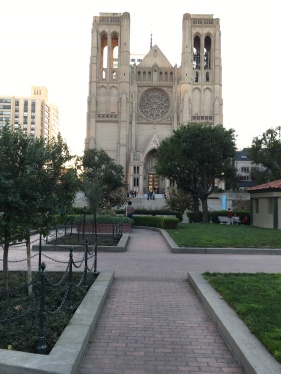 View from The Huntington Park

At the entrance to the park, this plaque is seen

a Fountain at The Huntington Park

The neighborhood was destroyed in the 1906 earthquake and fire, except for the granite walls surrounding the Stanford, Crocker, Huntington and Hopkins mansions. Those walls remain and black scars caused by smoke from the intense fires that burned after the quake can still be seen.

The last evening at that Union Square area I looked up and suddenly understood that a certain tall building with the American flag on top, was our Serrano Hotel! I asked if I could be allowed to see the sunset view from the top but no, unfortunately, the building was undergoing renovating so that will have to wait. That reminds me of the mentality in Denmark and in Sweden.

Imagine you ask this question in Sweden.

Can I go to the top floor to see the city?

No, (I am sorry) I am not allowed to let you do that and my boss is in a meeting.

Then the Danish version!

You can go and have a look, that s perfectly all right!