The Freedom Trail in Boston

Street decoration near the Old South Meeting House in Boston 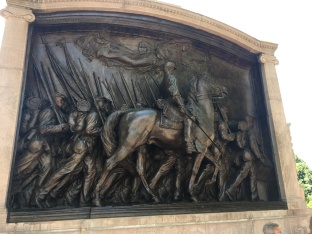 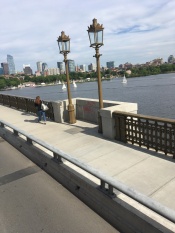 So much history is available in the city and given to you by posters, signs, buildings, monuments, old churchyards and live actors from the birth of America and the revolutionary days when ”taxation without representation” became unbearable for the colonists in North America.

You can walk along the Freedom Trail on your own or in a group with a guide in a historical costume. On summer evenings you can take part in haunting ghost walks with the perfect settings of the old churchyards where people were buried in many layers in the days of the colonial settlers.

The marked red trail highlights the American Revolution and ideals of freedom of speech at the 16 historical sites. I would like to mention a few of them in this post.

At School Street a mosaic in the pavement and a sculpture of Benjamin Franklin mark where the oldest American Latin school used to be. Unlike four other founding fathers in the Latin school, Franklin didn’t complete his schooling. In spite of that, he was one of America’s brightest men and famous for inventing things, postal offices and his part of the founding of The United States. B. Franklin was born in Boston in 1702 and died in Philadelphia in 1790. He is the only signer who signed four of U.S.A.’s revolutionary documents. He actively spoke out against slavery and for protection of Native American rights.

Old South Meeting House, once the biggest building in Boston. Built 1729 by Puritans and saved from demolishing by activists 1877 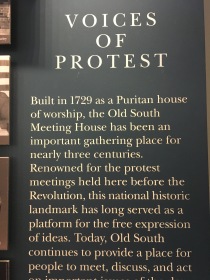 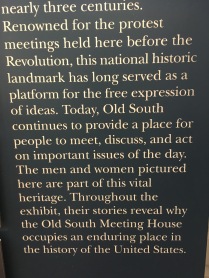 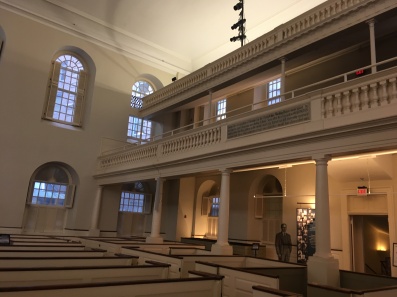 Inside the Old South Meeting House

Inside the Old South Meeting House. Quote from George Washington

The Boston Tea Party met at the Old South Meeting House. 5000 colonists crowded on December 16, 1773, to decide what to do with the taxable tea at three ships in the harbour. At a given signal from Samuel Adams, men disguised as Mohawk Indians dumped the tea leaves of a value of $1 million in today’s value in the Boston Harbour. Martial laws were established, and English sailors and soldiers were sent to enforce a blockade of Boston.

A Statue of Samuel Adams, Merchant and brewer orator and Signer of the Declaration of Independence. Faneuil Hall used for trade and meetings up to the American Revolution 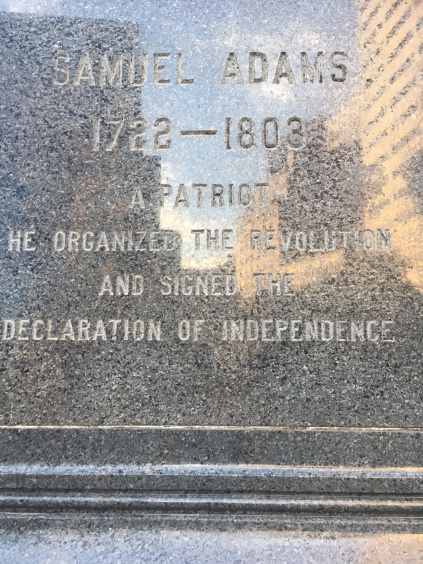 Samuel Adams 1722-1803, A patriot. He organised the revolution and signed the Declaration of Independence

At the Bunker Hill battle, a young doctor Joseph Warren died as a hero on June 17, 1775. A few months earlier he sent Paul Revere to warn fellow patriots about the arriving Englishmen at Lexington and Concord which was the start of the American Revolution.

I did not reach that historical sight this time, so here is a picture from a trip in 2009 where my interest in American history started.

Statue of Colonel William Prescott, The Bunker Hill Battle June 17, 1775, in front of the obelisk. “Don’t fire until you see the whites of their eyes.” (Unknown who really said that).

I am moved to see the many old gravestones, many with skull and bones as a symbol of the ever-present death at the time. 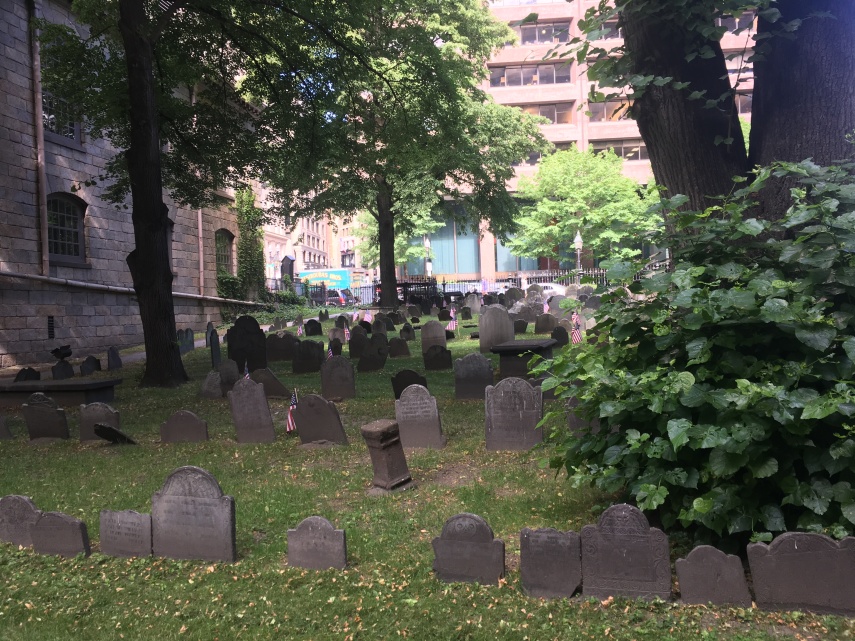 Samuel Adams, famous for his part in starting the American Revolution is buried at the third oldest US graveyard, Granary Buring Ground as well as Another Founder John Hancock and James Otis.

At King’s Chapel Buring Ground Henry and I observed that Stars and Stripes flags on the graves were collected by an official at the place. We asked him if he could tell us where to buy such flags as we wanted to put some on the fallen WWII U.S. Airmen’s graves in Denmark. The man didn’t waver one second but gave us the whole bunch to bring home. Now we had to walk with a lot of graveyard flags through Boston without drawing too much attention to us. Henry wrapped them in a big plastic bag, and they continued with us the whole long trip. I later found out that Memorial Day or Decoration Day is a holiday in the United States for remembering the people who died while serving in the country’s armed forces. It is observed every year on the last Monday of May, and the flags are put on the graves on that occasion.

The Declaration of Independence was first read to the people of Boston from the Old State House balcony on July 18, 1776. Now the building serves as Boston’s Revolutionary Museum.

Old State House from a distance

Plaquette on the Old State House

Boston Common and the Public Garden

The common was purchased from the first settler by the Puritan colonists for them to graze their livestock. In the corner of Boston Common is the old Central Burying Ground. Just before leaving for the Amtrak train to Philadelphia, I got a few photos of little children’s gravestones. The loss of children was immense at the time. 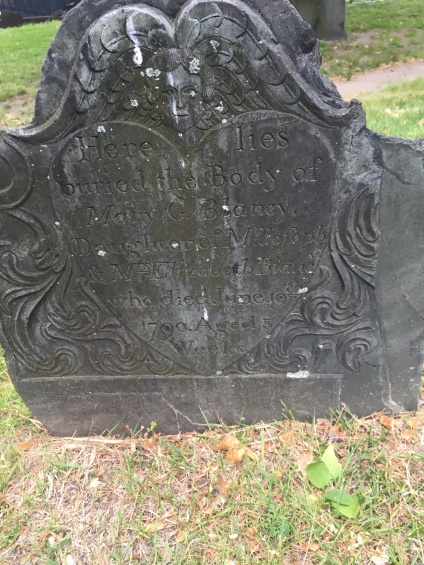 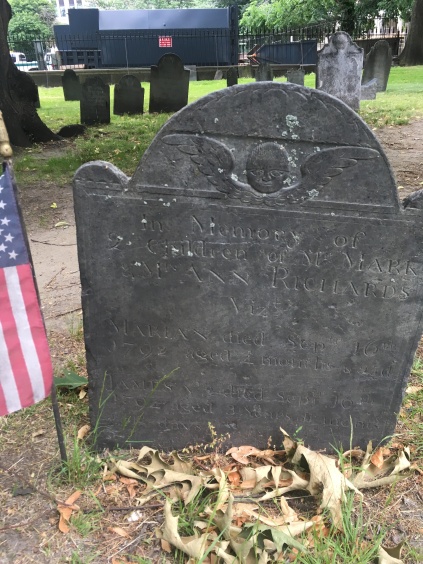 Central Burying Ground in Boston Common. A small angel is carved above the gravestone of a four-month-old girl dead in 1792

The British “Redcoats” overflowed the Common on their way to the battlefields of Lexington and Concord in April 1775. Here I made that grave mistake to ask a “Blue Coat” if he was British!

“I am LaFayette” at Boston Common ready for a guided tour

No, Madam, I am LaFayette!

I had only just arrived, and the history was not present yet. 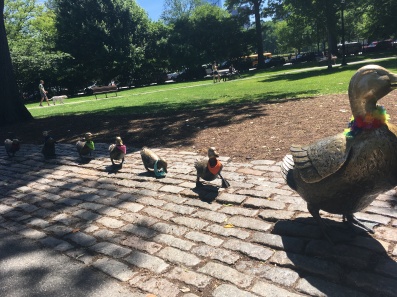 Give way for the ducklings in Boston Public Park

Adjacent to The Common is the Public Garden where you can find the goose mother and her ducklings from famous children story from 1941 “Make Way for the Ducklings”. In addition to the bronze ducklings, the Public Garden is the first American botanic garden. I had to wait a long time to get a photo without a lot of children and adults wanting to sit on the ducks.

Across the Charles River is the visitor centre for the first Naval warship USS Constitution. George Washington ordered six of these battleships to be built as a navy was essential to the newly founded country.  You pass through security check before entering the “Old Ironsides” as it’s nicknamed. In 1812, she fought the British Frigate HMS Guerierre and cannonballs seemed to bounce off as if she was made of iron.

Naval officers are actively serving at the ship which is still sailing out for events, and when we visited last summer, we were lucky to hear a live choir performance of Christian young people, on board in the Charlestown Naval Yard. I will show you more on this ship in a future post.

Tagged as: Boston, History, The American Revolution, The Cradle of North America, Travelling