The Music of My Youth

Someone posted a YouTube video of an old pop group, The Byrds who were very popular for a few years in my youth.

Normally I never listen to the music of that time because I don’t know how to handle the emotions that arise. This one was the tune “Turn, Turn, Turn” and “Mr.Tambourine Man”. The first one was written by Pete Seeger who has the text from the Old Testament and the last one was written by Bob Dylan, but The Byrds made the tunes so much more popular in their editions. I didn’t have pictures of them in my room unfortunately. These Magazines were difficult to get hold on. Working on this post my blogger friend Clive from England has posted on The Beatles’ “Please, Please Me” from 1963. Please follow the link to see his post. 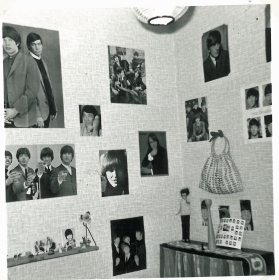 My room in 1964 with the Rolling Stones, Beatles 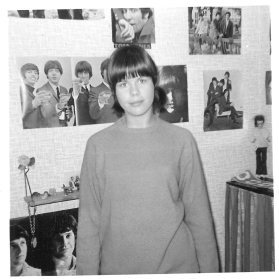 My decorated room in the autumn 1964. Paul Jones and The Kinks are added to the collection

Transition from childhood to teenager

I wanted to look like the Beatles so I had a hair cut that should be similar. Fortunately I changed that during the next year. I also tried to learn to play the guitar and got my fingers hurting from the practice. Some of the boys in my class were very clever in playing guitar and helped me to start playing. I wasn’t satisfied with the sounds I could make and gave it up. The text for the songs were not found anywhere but to learn them by heart I wrote down while hearing the songs. Often I didn’t know enough English to grasp the texts. I had a longing for understanding English and that has never left me. 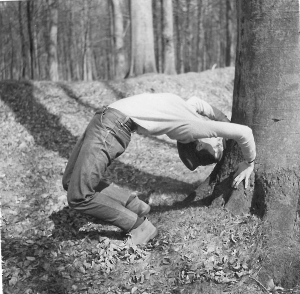 Glimpses of the Youth Revolution from the mid 1960s

Few people today know what a revolution it was at the time when teenagers chose the Beat Music and the new hair styles and fashion. The blue jeans were looked upon in horror. My father soaked my blue jeans and I picked them up and wore them. Boys were forced to the hairdresser to get a decent short haircut.

My confirmation was a traditional party for the family. My parents had made such an effort to make a wonderful party. I didn’t like to attract attention and the dress was not my style. During the evening I wanted to play a L.P. record “With The Beatles” or “Rubber Soul”with the Beatles and one of my uncles got up off his chair pushed the pick-up in anger so that it made a scratching sound. I was very sad but didn’t complain. I think my mother comforted me and told me afterwards that my uncle was upset as he had just lost his job.

My room in 1965 among Bob Dylan, Donovan and Joan Baez

The live videos from the time are so bad in quality that I chose to show you this link with the most popular songs. What I loved was the harmonies in their different voices and the lyrics that i only understood in fragments and the 12 stringed guitar in the front. Another pop group that caught my attention was “Procol Harum” with “A whiter Shade of Pale” here in a primitive video but the sound was as it was then. I think the fascinating sounds were a combination of voices and a synthesizer.

Back to “The Byrds”

I was in England that summer 1966 and one of the boys in the family we visited told me that the text for “Turn, Turn, Turn” was from the bible. I was very impressed that bible verses could be used for modern pop songs. Today I would think that it’s all there in the bible and a lot more could be used in pop songs.

August 1966 at my childhood home with my transistor radio

My main purpose of this post is to try to describe the feelings I had then back in 1965-68 when I found the pirate  “Radio London” station on my transistor radio that I had got for my confirmation in April 1965 as the biggest gift. Nobody told me where to find it and it was only to be found at a very narrow space at the long wave channel. In Denmark we had nothing for young people at our State’s radio and I never turned my ears in that direction any way. I had inherited a love for everything which was British, so I stuck to this until circumstances got me interested in classical music from 1968 on wards.

(I realise now that the pirate radio stations were stopped by British law already in August 1967.)

The radio had to be held in a certain angel to be heard. When I heard a tune that hit me right in my heart I had to take the transistor to the kitchen where my mother always were doing something. She would either prepare food or clean up after a meal and I wanted to share with her the beautiful harmonies that I heard. I am so glad that she understood how precious it was for me to hear melodies sung in different voices like these of the Byrds’ and other groups like the Animals, the Kinks and the Beatles.

The fast speaking London disc jockey would always begin talking before the tune was finished so it was never played in its full length. Looking back I preferred the songs in beautiful harmonies and with good texts and not the hard beat with a lot of screaming and loud noises from drums and guitars. But I also loved the sound of the electric guitar when you could hear the many strings in harmony to the vocals. It was not a lot of tracks that I loved but when the few really good ones came my world stood still.

Very few times I went to a live concert. Both times I went alone. Maybe it was so special for me that I wouldn’t share the event with somebody who maybe wouldn’t appreciate the music like I did, maybe my school friends had other idols as we called them. Maybe I just didn’t know how to ask anybody to go with me?

The first concert was Donovan who performed in Tivoli in Copenhagen. I had persuaded my mother to get a ticket during my school day. I am sure it would have been sold out very quickly and I suppose there was a certain telephone number to call to get tickets. That was very kind of her as she was a bit shy as a person.

I loved the cap that Donovan always wore and I was looking in shops to get one, but at that time only the famous people could get designed clothing. The variety of stuff like that was very limited.

When the day arrived I think it was the fifth of December 1965 I was so nervous that I fell down the stairs in our cellar. We always left our house through our cellar or basement. It really hurt and my mother heard the sound and tried to convince me to stay home. I hurried up got on my bicycle and later the train to the center of Copenhagen where Tivoli is. Donovan sat very quietly alone on a chair at the scene and played his music, the sound  was like his records. The other time was also in Tivoli and the band was “The Beach Boys” they didn’t sound as good as their records so I understood something about recording is made of many recordings put together. It was a bit disappointing.

Dreaming in my room

What did I do in my room listening to the songs I loved? I sang along on the different voices and I would draw fashion drawings and portraits and write letters to pen friends in different countries, I would do my homework though it was difficult to concentrate while listening. Much time was spent by making my clothes sewing or knitting. I wasn’t conscious of loving to be alone but I was doing these things alone.

photos by my twin brother

There is a time for everything,
and a season for every activity under the heavens: