A School Excursion to Prague in 1967

Our teacher at an art exhibition

My twin brother and I were lucky to have a teacher Holger Juul who loved to teach in subjects like Danish, English, Latin and History. Teaching seemed to be his life, and I often think about him whenever I meet a topic that he taught us about.

He was born of Danish parents who lived in St Petersburg in Russia before the Russian Revolution. They had to flee as soon as the Revolution broke out. At one occasion during our years with him at school, he took the time to explain that escape route back to Denmark via some years in Sweden. My brother and I kept in contact with him until he passed away in the 1990s. Unfortunately, he never wrote his memoirs. I would love to read his story.

Before we finished our last year before the Upper Secondary School, our teacher volunteered to take our class on a week-long trip to teach us history, architecture and culture. The year before we started to save about two dollars a week to afford the trip to Prague in the former Eastern communist block in 1967. He took the time for this trip during the summer! I am not sure if any of us thought about thanking him. 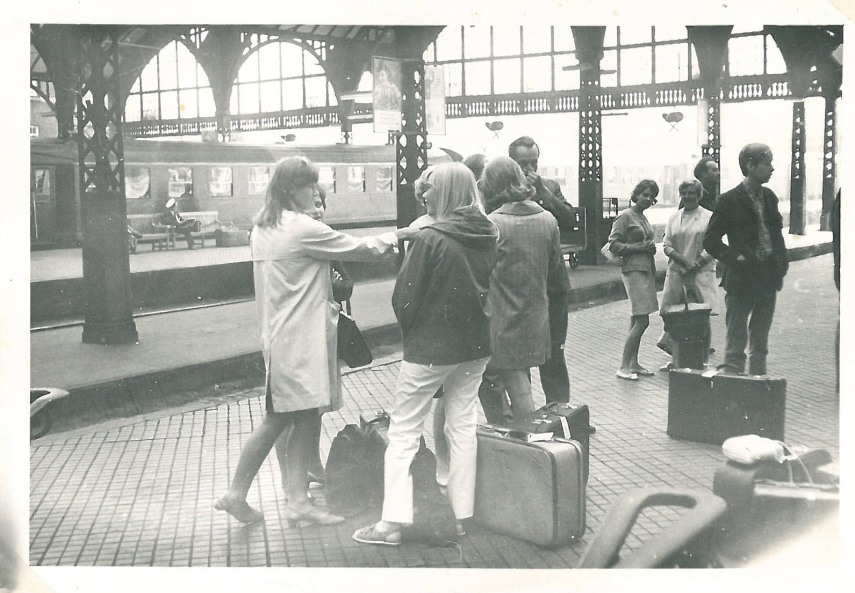 We started our trip at the central station in Copenhagen. The quality of the train was excellent, the seats were comfortable. After a ferry ride to former Eastern Germany, the next train was less satisfactory. We drove to East Berlin, where we had a pause to find another train the last long way to Prague. That train had hard wooden seats. At the platform in East Berlin, I saw people who were greyish or pale and not well nourished. 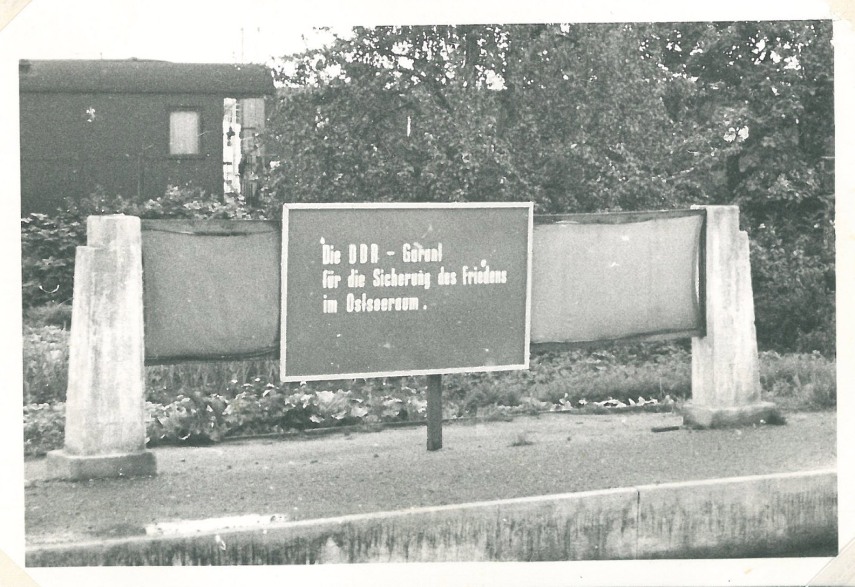 One of the propaganda signs at a station in former East Germany. “The DDR is a guaranty for peace and security in the Eastern part of Germany.”

We sang pop and folk music from the United States and England all the way on the train. 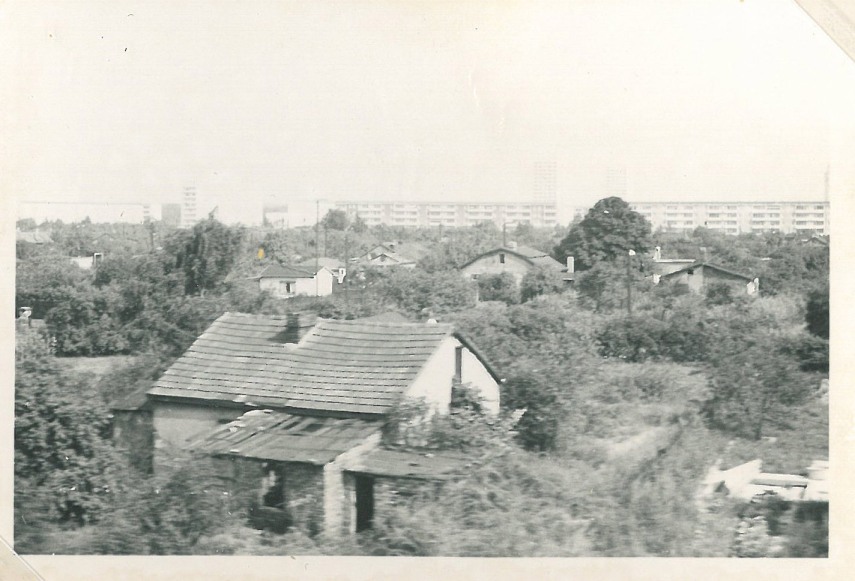 The sheds along the rails in former East Germany. In the background ugly flats

That was the first time in my sixteen-year-old life to see people suffer. Somewhere along the route, looking out at our window, we could see a glimpse of the iron curtain, and the propaganda billboards along the rails told the story of the beautiful country we visited. We knew that we in Denmark were lucky to have been liberated by Montgomery’s men and not the Red Army. The British troops came first.

During the night, we reached the Czeckoslovacian border, and the noisy and bumpy train ride came to an abrupt halt. Rude uniformed personal yelled at us to leave the train. Our passports were to be checked by the customs. We were allowed in again and in the morning were arrived in Prague.

Leaving Prague for the boat trip on Donau

Two of my classmates in Prague resting on our luggage

Three of my classmates in Prague resting on our luggage

An iconic sight in central Prague. The old Townhall 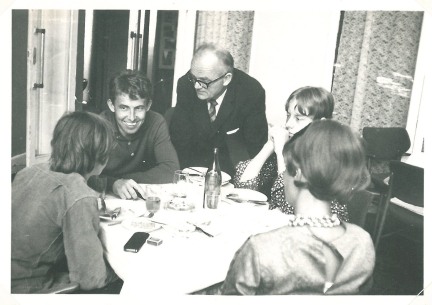 The crowded area of the Castle in Prague

To get to our modest hotel, we went by tram. The front door was open while we were on it and suddenly a brown oldfashioned suitcase tumbled out on the street. Of all the luggage that suitcase was mine. I felt very embarrassed. Fortunately, I got everything back intact. 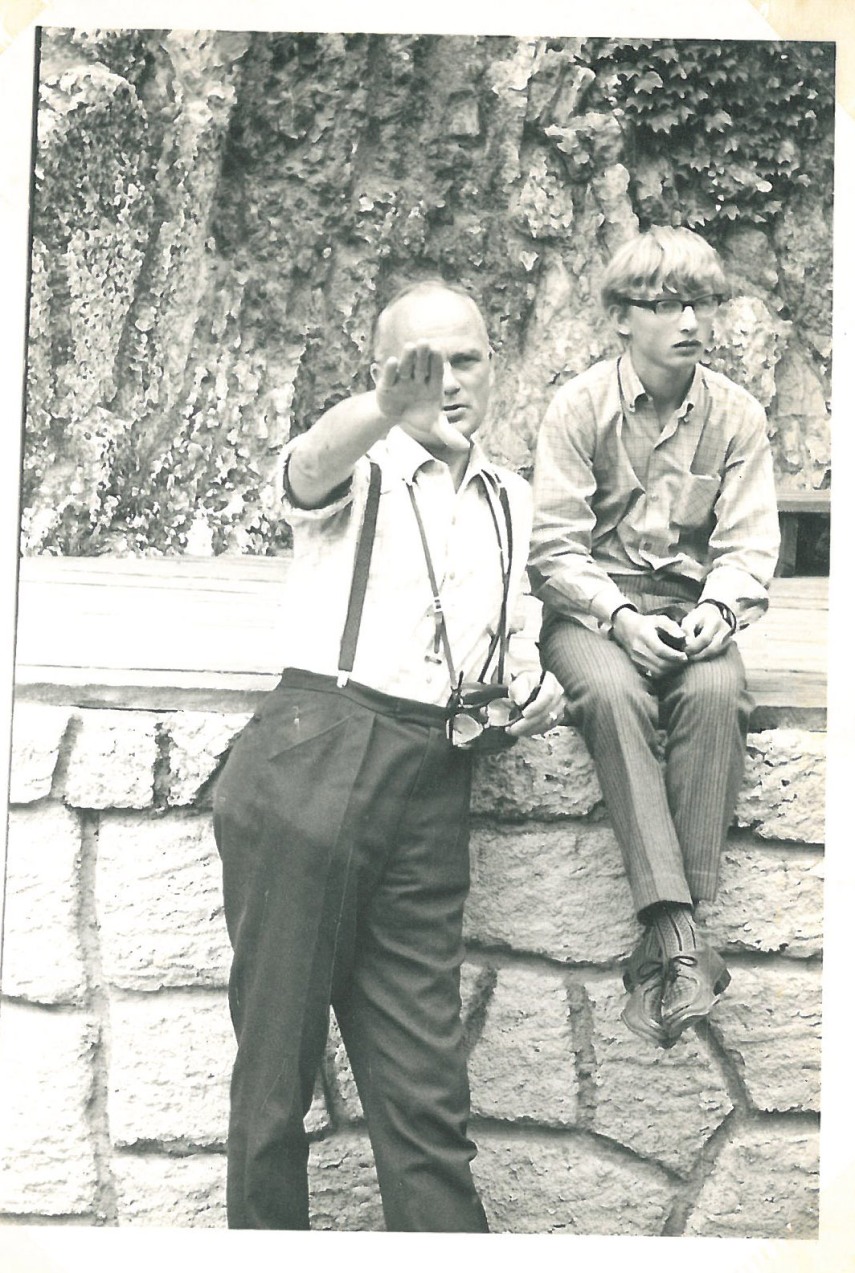 Somewhere in Prague, listening to our teacher?

An iconic sight in central Prague. The old Townhall

Our teacher taught us about the wars, the Austrian- vast Hungarian kingdom and a lot of other things. None of us had been much abroad before, so we were interested in meeting young people and looking for something to buy. We could only buy things like table cloths or crystals. I bought a table cloth for my mother which she used for many years. In Denmark, we could not get a lot of smart clothes yet at that time, but we made things ourselves. I had painted a white T-shirt with the British Union Jack on the front. To my big surprise, someone stole it on a washing line. It dawned on me that in the eyes of the local young people, we were very privileged western teenagers. Denmark at that time was still a place where everybody trusted each other.

Summer of 1968. The Czechoslovakian tablecloth at home 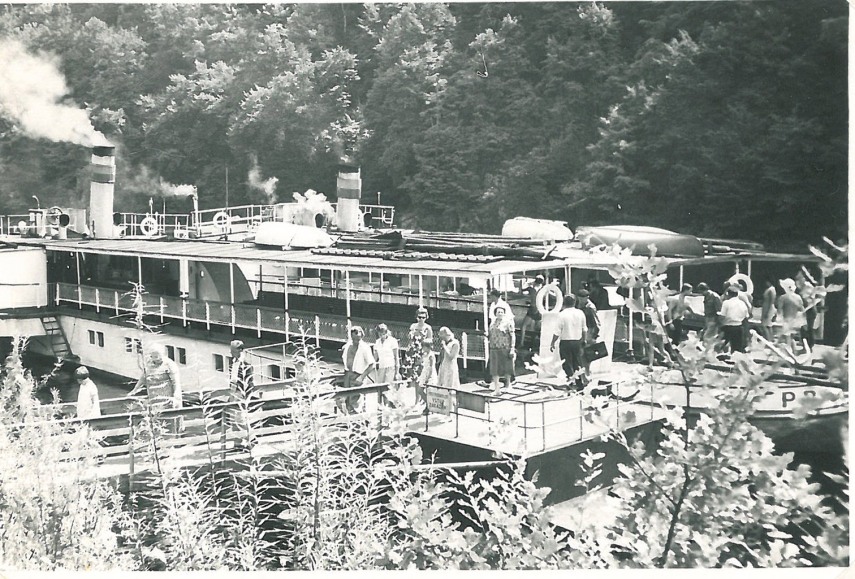 The steamboat taking us to the countryside on Donau

The steamer carrying us to the country on Donau. Our teacher talking with the local guide and another teacher

Arriving at the camp without knowing what would soon happen 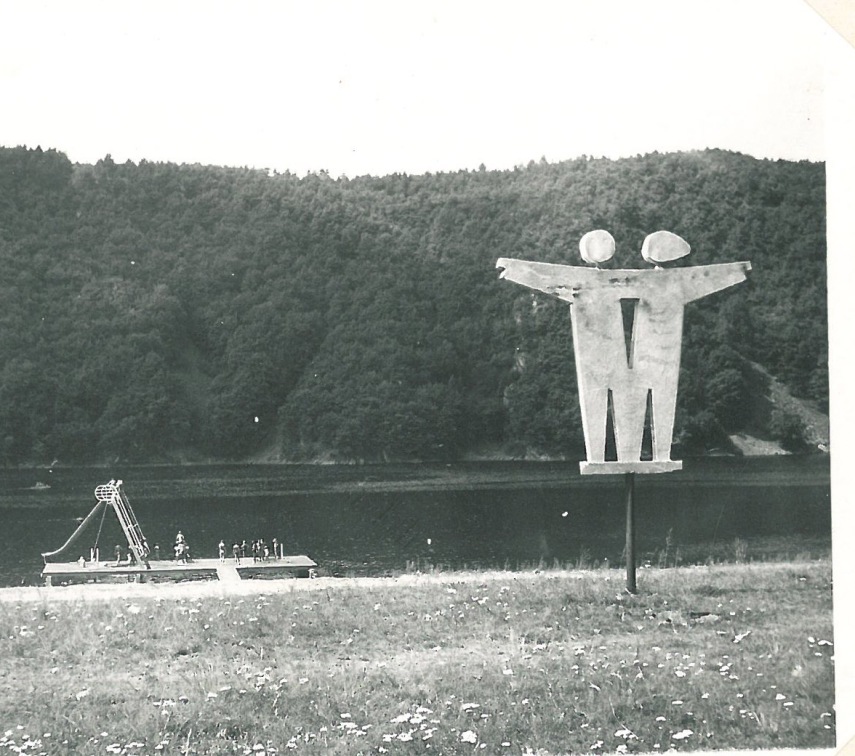 Part of the trip was at a youth camp with people from other Eastern countries and distant parts of the former Soviet Union. When we came out of our boat, we were carried away and thrown in a basin with a fountain. I was furious, afraid that my watch would be destroyed. I didn’t appreciate that part of the trip too much. Only our Czeckislovacian guide Karel spoke English, so our only encounter with East European youths was them throwing us in the water.

I was agitated by the treatment

Me and my best friend trying to cope with the situation. We had never before seen obese people. 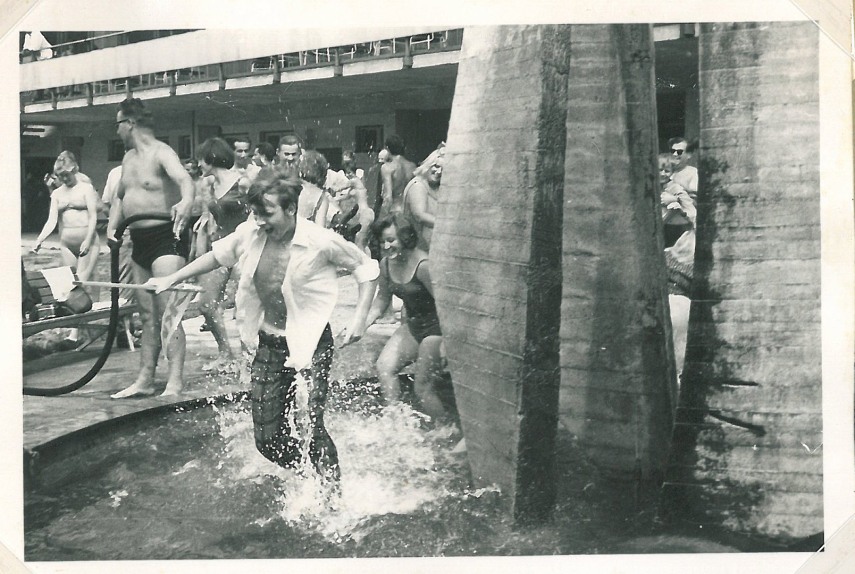 One of our boys enjoying the water

One of our boys enjoying the water

Our teacher gives us instruction on our return travel. Some French boys had found our table

The breakfast at the camp. Some of the girls didn’t appreciate the food. I liked everything

Breakfast in the youth camp 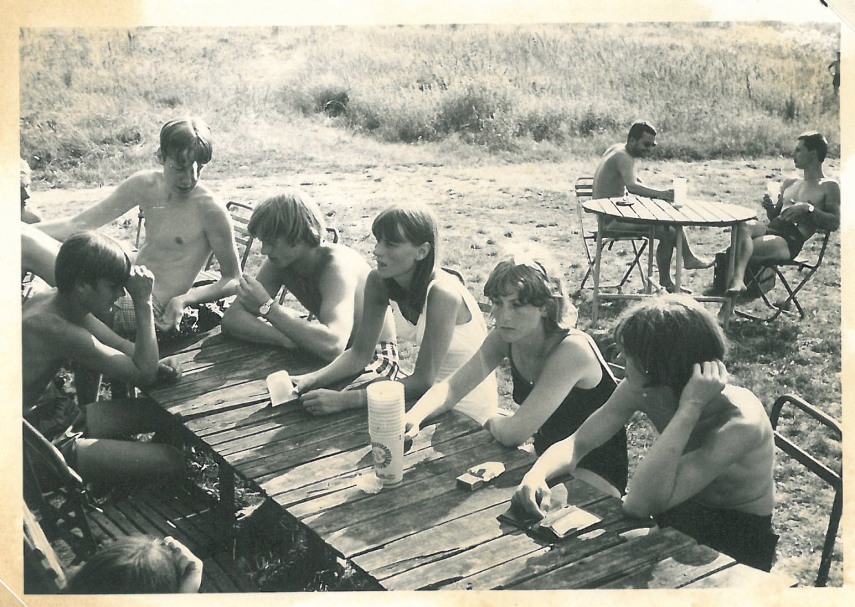 We sit idle at a table at the camp 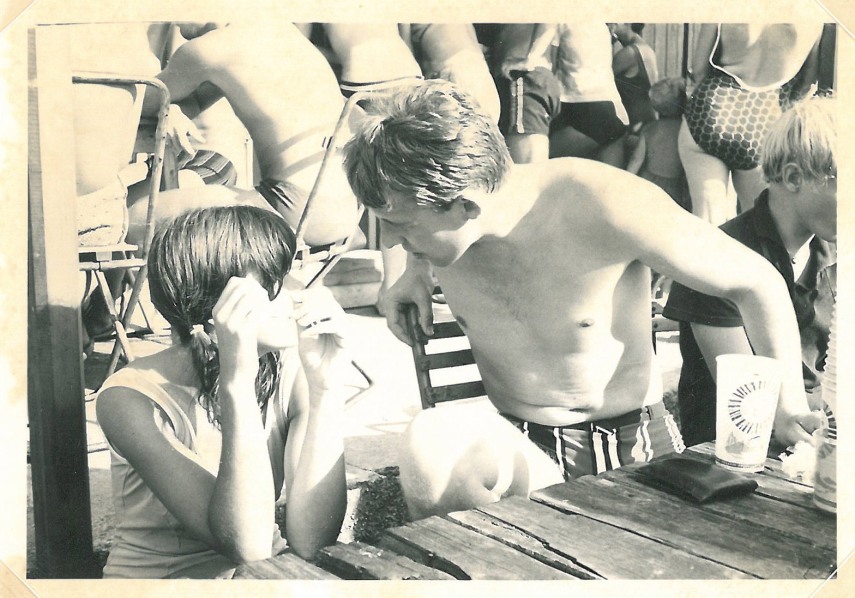 The Czechoslovakian guide a bit too interested in me

I was glad to get back home again, and the sight of the familiar red-tiled houses and the many Danish flags in the gardens convinced me of the love of my country. I treasured our Western values and freedom, which I then never thought we could lose. We had been lucky to receive the Marshall Help, which slowly got our economy up again.

Tired but happy to be back in Copenhagen Central Station

One year later, in 1968, the Soviet Union had crushed a peaceful revolution in like they had done in Hungary in 1956. The brave people of Chezkoslovacia didn’t resist with military power but succeeded for a short time to halt the overwhelming Warsaw pact military invasion with skill. They turned the street signs which made the invaders go in circles or even leaving the country. Most famous is the young student Jan Palac who burnt himself to death in protest against the Soviet invasion and the loss of their newly gained free speech and the author and poet Vaclav Havel who later became a popular Primeminister.

Tagged as: Photos, Prague, School travel in the 1960s