It took my husband and me three visits to Arnhem in the Netherlands to be able to see the museum “Airborne” on the tragic operation Market Garden in nine days in September 1944. The Western-allied forces wanted to end the WWII by quickly getting over the river Rhine to finish Hitler’s regime. Out of more than ten thousand British and Polish Airborne troops who fought around Arnhem to get to a bridge over the Rhine 600 made it to the bridge and held it for nine days before they had to withdraw. Commander John Frost was injured and captured by the Germans. His people had waited for reinforcement from Montgomery’s troops. 2000 Polish airborne troops came down when it was already over! Only 2.293 made it alive back to England. The first time was in 2006 visiting Kröller-Müller museum on mostly Van Gogh’s paintings close to Oosterbeek we discovered the Arnhem Oosterbeek War Cemetery with 1759 graves of allied airborne soldiers from England, Canada and Poland. Some of the buried people are from the liberation of Arnhem the year after. Wanting to find out more we found that the Airborne museum was closed for the day. 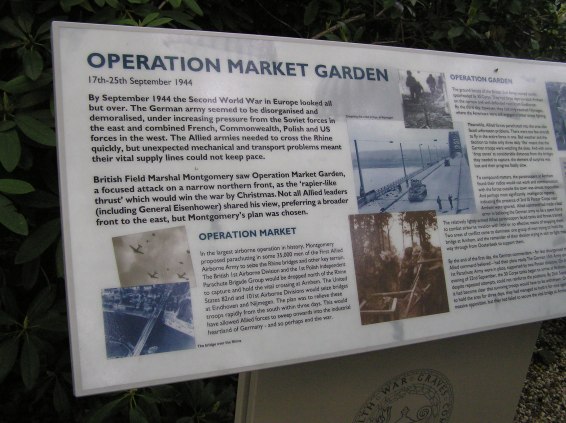 Information board in Oosterbeek 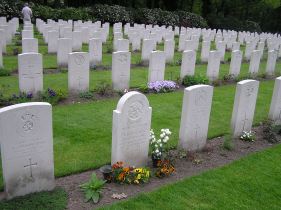 Part of the Arnhem Oosterbeek Cemetery

A war memorial at Oesterbeek 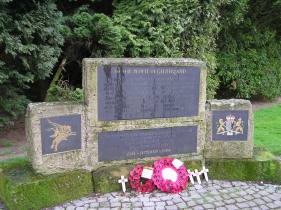 Part of the Arnhem Oosterbeek Cemetery 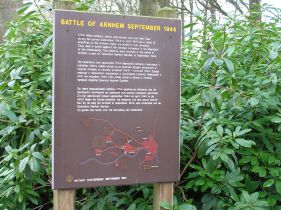 Information Board on “Operation Market Garden

Next time was arranged by “Cultours” on a military history group tour to the Normandy seeing everything, that had to do with the invasion of D-Day.

Our photos from the Military tour May 2009

Invasion vessel at one of the many museums in Normandy

A memorial at one of the beaches invaded at D-Day 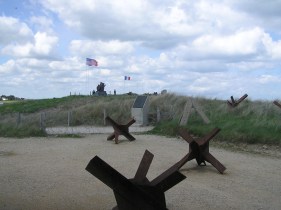 war memorials at the beach

Marks of the battlefield

Stained glass from church Angoville. In Honor of General Don F. Pratt,  the first American who died in a glider landing at 0400 hours D-Day in that area. 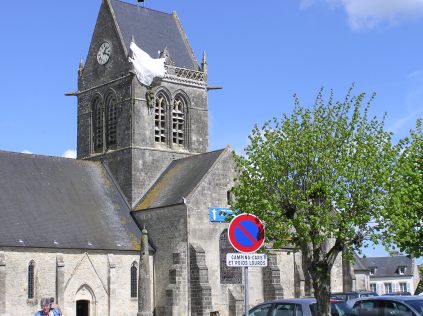 The famous church where J.Steele hang on his parachute in Saint Mère Eglise 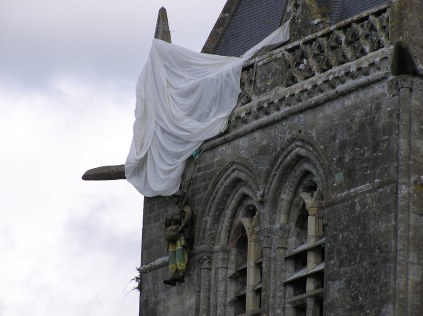 The famous church where J.Steele hang on his parachute in Saint Mère Eglise

On our way back to Denmark we stopped at Arnhem and saw the famous John Frost bridge. But the Air Borne museum was again closed. This time due to restoration.

The “John Frost Bridge” over the Rhine 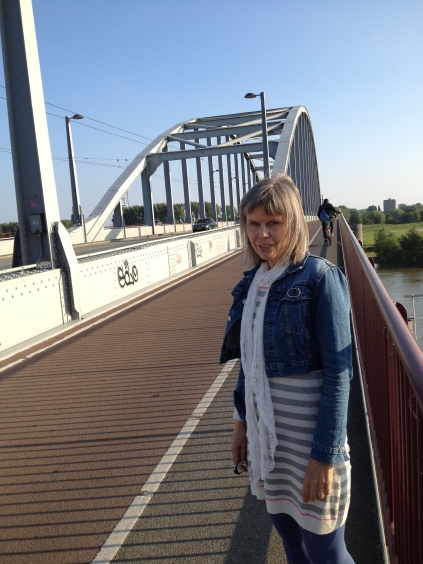 The “John Bridge” over the Rhine

We had to go, and we finally succeeded in 2013 and spent hours there. “The Hartenstein” Airborne museum had been carved out under the house to make shows in sound and pictures on Market Garden. It used to be a hotel. Most impressive was the displays in the exhibition cases showing very vividly how the soldiers had defended the place before they had to flee back. They had treated the wounded in the house as well. 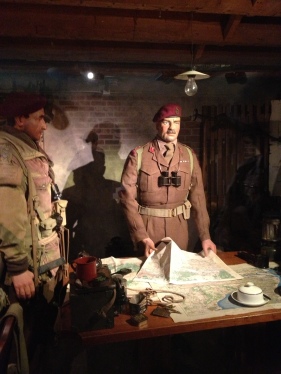 Exhibition case from the “Airborne” museum

They were helped by the local people who later were cruelly punished by the Germans in the area. They were driven out, and food supplies were cut. Many civilians died of hunger.

Exhibition case from the “Airborne” museum

Here are rare photos from the operation via a blog