This past Saturday I took part in a march for freedom in Copenhagen. It may sound strange. Denmark is a free country with freedom of speech and civil rights according to our constitution. Never the less nowadays the EU has more to say than our laws which means that we have lost influence over who is entering our borders and we can’t send anybody back to where they came from if immigrants breaks the law and commit crimes.

The Muslim population is rising and they demand special treatment on a lot of issues. I don’t have to explain on this. It is the same pattern in every country with a growing Muslim population. The march for freedom has taken place for two years only and normally they are met by aggressive left-winged protesters and rioters. Here they are called “the autonomous”.  They even have a parents’ group that support them if the police get in too close contact with them. They are kindly treated by the biased mainstream medias and if anything happens to them the police force is blamed. A few days before the march they had set a part of Copenhagen a blaze with hardly any consequence for them. The day before the march they had a big party which explained why they didn’t turn up to protest the march for freedom as they normally do. 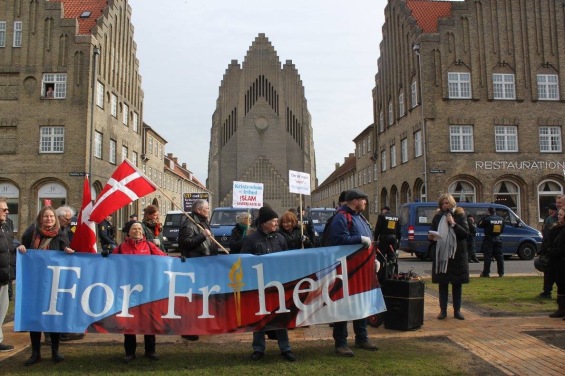 Katrine is speaking in front of the impressive Grundtvig’s Church built during the depression in the 1930s. My closest family live there during the war 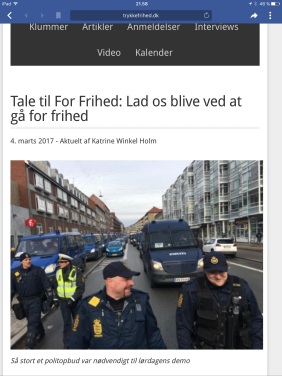 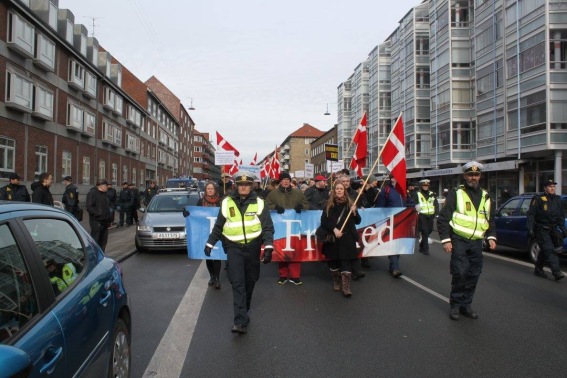 The front of the march in thearea where I was born

I am looking into the picture from the left

We are passing a church in the area

Lars Hedegaard speaks at this special place in front of an armed vehicle. Afterwards he is taken to a secret place, not allowed to walk with us

These pictures are from the “For Freedom’s” Facebook page

It was the first time for me and I had to get up at half past four to reach a ferry to take the ride with a friend. I could have travelled to Copenhagen quicker but I took the extra ride to be able to meet her and to hear about her life and her reasons for going. Her father had been a resistance fighter during WWII and I believe that many in the group have that background. They have heard first hand about the war and we were saved in the last-minute by the Allied troops because some few were willing to risk their life to fight against the occupying German oppressors.

For years now we have witnessed how our politicians have sold our country and sovereignty to the EU and a few are rising to protest.

We started at a huge church in Copenhagen. It happened to be the area where I was born. I remember the area as crowded with families and children, a working class area and we moved out to a villa in the suburbs of Copenhagen when I was three years old. Now this area has quite a big Muslim population and the atmosphere has changed especially in some streets. I wrote about the area earlier as my close family lived in a flat to the right of the church at the wartime and until 1955.

The first speech was in front of the church. The speaker was Katrine Winkel Holm, a priest from our Lutheran State’s Church. She spoke of the many bricks in the church representing how our country consisted of many people who together will keep our society together. She found it very unfortunate that so much police had to surround us for our safety but she also asserted that these marches were necessary as free speech was under pressure. She herself is the chairman of “the society of free speech and freedom of press”.

She spoke of the dangers from Islam and from the left winged fascists. The last group was responsible for the large amount of police present. The left winged uses intimidation and threats against those who arrange these marches. Cars have been damaged and front doors belonging to the arrangers have been marked with treats like:

“We know where you live!”

These threats are similar to Islamic anger and offended attitude and the two parts are allied in the fight against democracy.

The other speaker was Lars Hedegaard a journalist who four years ago was nearly killed by a home-grown Islamist disguised as a postman. L.H. managed to push the attacker so that he dropped his gun. The police was not very quick in catching the attacker and for days an abandoned car was left un-checked  by the police. The attacker escaped to Syria were he fights for Islamic State or maybe he is killed.

L.H. has since been living at different secret  addresses and is under secret service surveillance 24/7.  Last year L.H. was convicted in court for naming the name of the escaped murderer. L.H. is nearly ruined by being punished this way and also unable to work as nobody takes on an anti Muslim journalist.

Lars Hedegaard was not allowed by the secret service to attend the march but was brought to the place where he was to speak. Only the leader of the march and the police knew where it would be. Of all places he had chosen “The Islamic Center” and he spoke with a huge armed police car behind him and a massive amount of police men at all sides.

He spoke of the tragic choices many Danes have made to believe more in the rights of the Islamic faith with all its many forms of cruelty than in Christianity that was the base of our country for a thousand years. He made a list of the achievements of Mohammad and of Jesus. He reproached the clergy of not defending Christianity. He concluded that it was high time for the authorities to do something to prevent sharia laws to take over.

“If Islam wins we will all lose”

“Christianity is Freedom, Islam is submission”

“Together against Islamists” “Islam and Sharia” not in our country”

After the march I needed to be on my own so I had a nice walk from Norrebro and to the center of Copenhagen. I took some pictures that I want to show you. Still we have nice places to see for tourists.

In the streets are a lot of arabic shops and I walk in the cemetery where famous people like Hans Christian Andersen and Soren Kierkegaard are buried. The place is used as a park today.

The slide show can be stopped 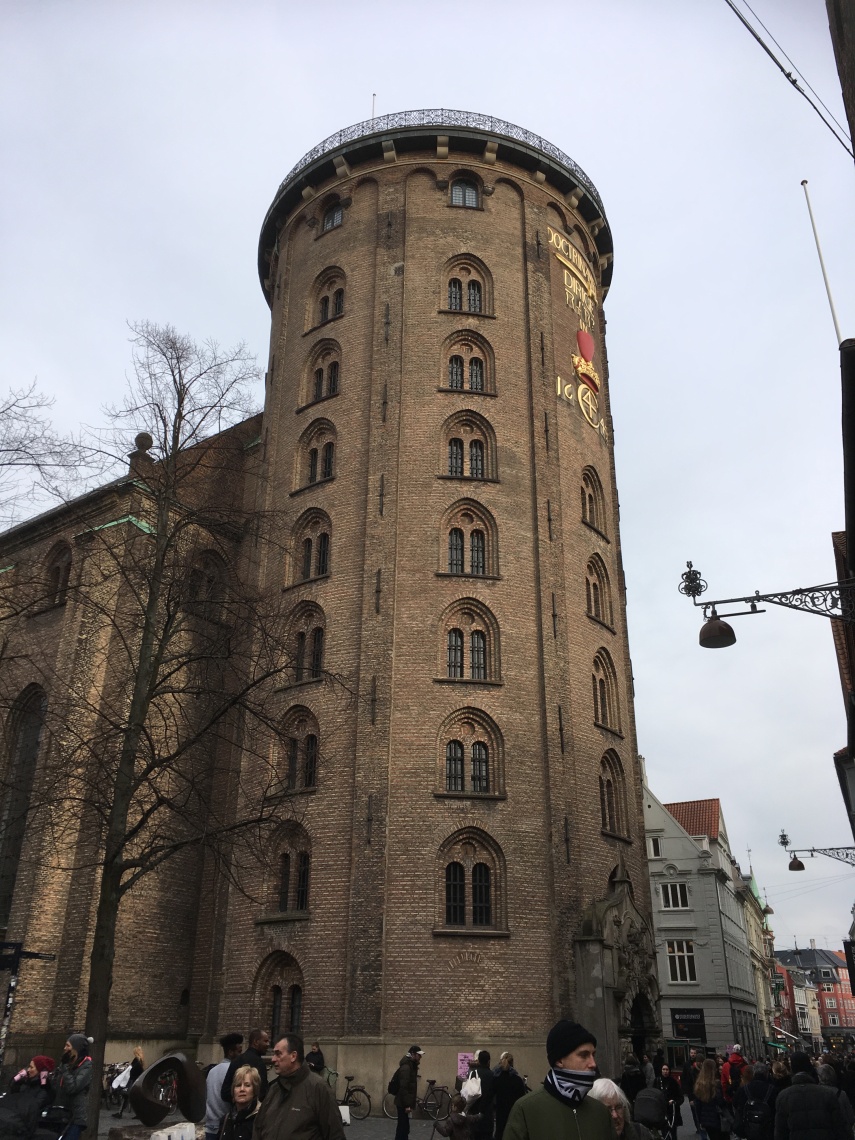 “The Round Tower” from 1637 in central Copenhagen. No stairs inside as the king wanted to be able to ride up on his horse

I am thankful that people abroad show interest for our country too as I have been asked about facts on the march.