I am reading Margaret Mac Millans book on WWI ” The War that ended all Peace”. She gives a thorough description on the men in charge of the involved countries.

The German Kaiser Wilhelm was the first of eight children born in 1859. His mother was  the eighteen year old daughter of Queen Victoria called Vicky.

The birth was very complicated and the doctors battled to save his mother’s life. Some hours later it was discovered that his left arm was pulled out of the socket and that he was alive!

The mother admitted to Queen Victoria that she did not pay much attention to the children in the start, but later she overcompensated by overseeing every detail in his education. He went through horrible treatments for the paralysed arm in his childhood.

A famous porcelain doll was modelled after this little prince Wilhelm.

Kaiser baby doll from about 1912 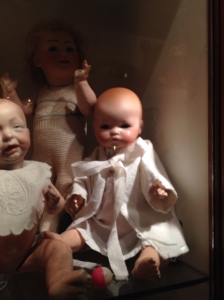 Kaiser baby doll from about 1912 and a “Dream Baby” A. Marseille

He also longed for his father, but the Prussian upbringing didn’t allow a close relationship to his father.

All this emotional neglect has played a major role as he suddenly became emperor in 1888 and got an enormous amount of power.

He thought he knew everything and wrote pieces of advice for the British king Edward on how to conduct the Boer war. He would change his mind all the time and only want to talk and not to listen. His advisers had to hide facts from him just to try to rein the enormous Germany.

I am sure that there are many more complicated factors that initiated WWI, but his unruled temper and vulgar speeches were not helping to keep the international situation from this world war.

All this lead me to the famous novel “All Quiet on the Western Front” by Erich Maria Remarque where the horrible war is described in detail from the German trenches in France during the last year of the war. You follow the very young soldiers from the same school class until non are left. They don’t have a clue about why they fight and in the end nearly starve to death having seen and endured things that they could not survive.

Many pictures can be seen on the Instagram page http://instagram.com/war_to_end_all_wars

Some found meaning in the horrors by reporting from the war zone or from helping or spying on the enemy.  I saw a touching special exhibition at The National Portrait Gallery in London this spring about people who died as heroes also nurses.

Albert Ball, Recipient of the Victoria Cross. Died 1917 in an air fight

Among those who didn’t survive the Great War were two war poets.

They died in the battlefield just before armistice day.

The first years of bonding between a mother and her child is essential for a secure feeling of being. When this is missing something that can’t be bought for money is lacking in the character. Fortunately a child can connect to any other loving and mature person who is there instead of a mother.

How I wish that our political leaders would be selected after the criteria of a good mature character as their decisions have immense influence on countries in generations.