In response to The Daily Post’s writing prompt: “Do Not Disturb.”

This past Sunday, my father would have been 95 years old. I now think about him with warm feelings, but it’s been a long way to come to that.

My father at my favorite spot in Copenhagen, The Gefion Fountain, May 1945

I have mentioned my relation to him in a post called “My Long Journey to Overcome Fear.”

He was born in 1920 in Copenhagen into a Baptist family. His father was struggling in periods to get a job. He was a bricklayer’s assistant and did all the hard tasks in the buildings carrying the heavy bricks up on a ladder. Late in his life, he worked in a factory making scouring powder and got so-called “stone lungs.” He died far too young in 1949. My father’s mother got ill at a critical point during the war. The Germans had occupied Denmark in April 1940, and in July 1944, a general strike broke out as a reaction to executions of freedom fighters. During that strike, she was admitted to the hospital for appendicitis, and as my father said:

“The physicians had disappeared to calmer places in the country and she died from the consequences as the infection spread to peritonitis. There was no cure from that.”

A few months later, my father, 24 years of age, was a fireguard in different official buildings as our Royal Theatre. The young men who should have served as soldiers had this duty while doing their jobs or education. The Germans had taken over, so we had no military during the war. On 19 September 1944, the Danish police corps were taken during a fake air-raid warning.

As a guard, my father was cycling through Park in Copenhagen to the place he had to appear. Two young German soldiers arrested him as they thought he too was a police officer. He fell off his bicycle by the shock and spend the day and the following night in a building at the harbor, not knowing his fate. He was later released, but many policemen were sent to KZ camps.

My father as a civil guard during the war

He was doing his education as a tool-maker during the war, and in that work, he got exposed to poisonous exhume, and together with the loss of his mother and the pressure of the war, he got severe problems with insomnia. The doctor gave him sedatives and sleeping pills, and he never got rid of these medications for the rest of his life. 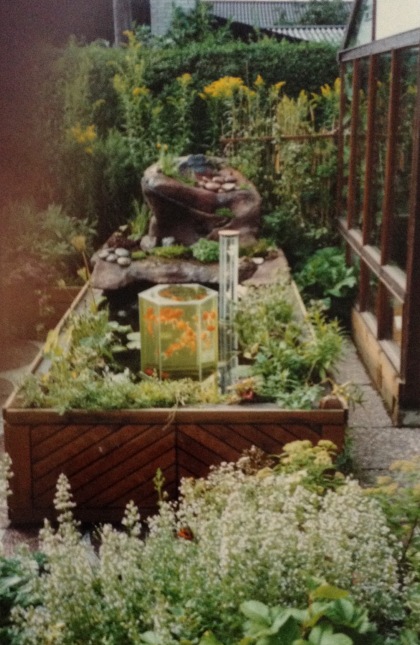 A pond and a greenhouse

My father’s creation a pond 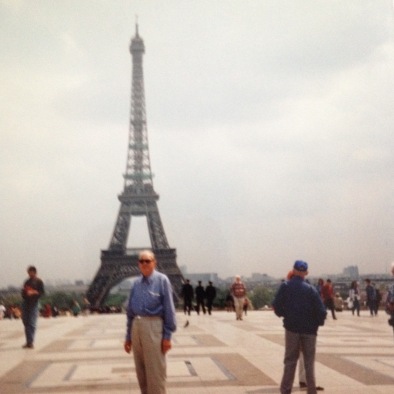 My father in Paris 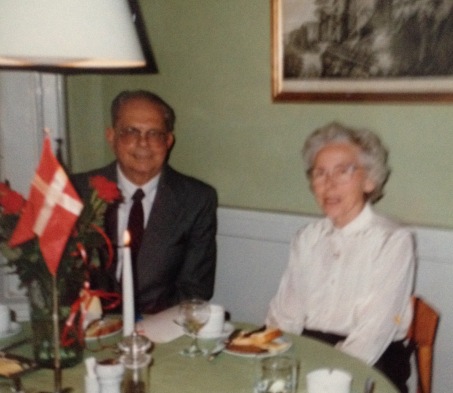 As a schoolboy, he was sensitive and described his teachers as brutal drunkards. His background as a Baptist made him an object to harassment. He was never encouraged at school and believed he couldn’t learn academically.

He was very talented, though. He invented a lot of things through my childhood and youth. Loved to be alone in the cellar in our house, making all kind of woodwork, plumbing, and stuff for the garden. He never thrived at his job as a foreman at a radio factory. The position was not suitable for him; he should have made the radio parts or invent new things, but as there was already one in this job, he was chosen to lead many women at a production line. He was immensely stressed by this work, but he feared to stand in the unemployed path, so he endured this for 25 years.

Times were tough in the fifties, and when the women arrived sick, afraid to lose their salary, he sent them home discreetly and signed them in for being present.

Just after his 25 years’ jubilee, times were terrible for radio factories here in Denmark. Everything was cheaper when bought from Hong Kong and elsewhere, and he lost his job. That became a huge advantage for him as he got a job as a caretaker for a biological firm working at testing the quality of seawater. He soon improved a lot of their equipment, inventing new things for the biologists. He got at least 15 good years at that place.

When we were children, he didn´t speak too much with my brother and me. He had some expressions that he used like:

” Walk quietly through the doors”. Translated to ” You are not supposed to be heard at all”.

He came home exhausted and had to sleep just after dinner, and his nights were terrible. While he was away at work, we enjoyed so much the company of our mother. She told us many stories from her childhood and youth, and it seemed to have been so much more fun with a lot of activities with siblings and friends. When he came home, the atmosphere changed to a more tense one, and for years I had stomach aches at dinner time.  I had problems expressing myself because of insecurity. I still prefer to talk with just one at a time because it is too exhausting to watch the expressions of those I sit around and to match my conversation with the situation.

He would make toys for me for Christmas and birthday, and I liked them. Still, I was never asked if I had any wishes, or I never said anything about it because I didn’t think it would be possible to get these things: A composition doll and a pram and a cradle with a canopy. 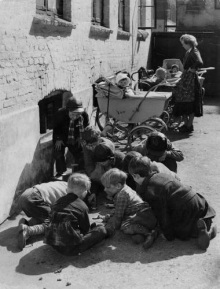 A press photo from the time

My own dolls bought a long time after my childhood 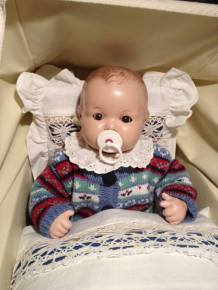 My dream of a doll 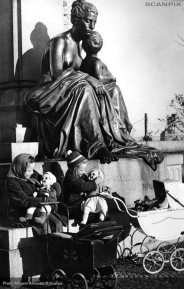 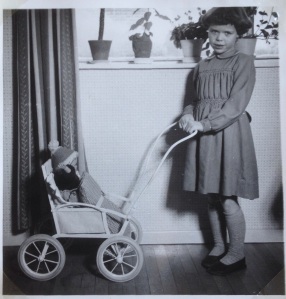 My push-chair at my 6 year’s birthday

I am sure he could easily have made the last wish come through. But to buy toys in a shop was too extravagant as he was so afraid of spending money he didn’t think he had, also a reaction to his childhood. He wanted to give us a good house and proper food. He had experienced being stuck in the flat because the shoes or clogs were at the shoemaker for repair.

One of the best things he made for us was a wooden house in the garden. Rainwater came into a tap from the roof, and the kitchen had a sink. The doors were in two, like stable doors. The other beautiful thing was a doll’s push-chair that was almost authentic for the time.

Unfortunately, I became panic-stricken by the thought of being alone with him in a room since I was thirteen and this feeling never left me before his death-bed eight years ago. He had read my diary and said:

If your mother heard about what you have written she would be taken to the hospital! My mother was the best I had so that fear drove me away from both and I became a difficult teenager.

As the years went by after his death in 2007, I can value him so much more. I know that he loved me, but he was so inhibited that he couldn’t express it with words, and his own addiction to medications gave him so much suffering that he just wanted to be alone.

His physicians should have reduced the doses gradually. But not many knew how dangerous it was to be addicted to sedatives and sleeping medicine.

I have written about him in an earlier post.