Today 37 years ago I got married. I was 28 years old and had longed for getting a family. After some turbulent years in my early twenties I met some Christian girls who convinced me of a new life. How I needed it. I accepted the faith in the Lord and still had great difficulties in living a Christian life. I went down even more the next year and at last I accepted to leave the old lifestyle for good.

Slowly I recovered from depression and felt that I was at a turning point for becoming a wife and a mother. I met my first husband at a Christian New Year’s party in the very cold winter 1978/79.

He was a silent type and I found him very attractive. He said he was a Christian and I believed him otherwise he could not have been a future husband for me. He walked me home from a night-duty at the children’s hospital where I worked. The winter was so cold that buses didn’t run and to go on my bicycle was impossible. I was very touched that he would do that.  He had a good education and worked as an accountant in the tax department in Copenhagen. Soon we started to plan our wedding on the 12 May 1979.

A few times I got a little nervous. He would be easily angry at very small and unpredictable things and he complained over his job and told me that some of his close family members couldn’t stand each other and never met. He had cut his relationship with his father, but because of our engagement he would visit his father with me.

Our wedding day was a beautiful day. Finally spring had come at least one month too late. He wore his military gala uniform and looked wonderful. My bridal bouquet was in Royal Air Force colours and some of the white were Lily of the valley. My beloved grandmother had that in her bouquet many years earlier. 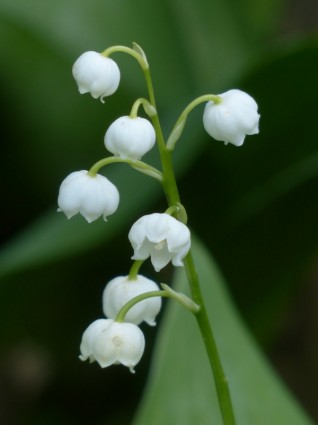 My ex-husband was a major in the military reserve and because of that we were allowed to use the Frederiksberg Palace Church in the building used for military officer training. During the dinner party I sensed that I had no contact with him. I didn’t know what was wrong and couldn’t ask. A “glass wall” had gone down between us. I had to act happy the rest of the party in the most romantic surroundings and with my family and friends around me. Later I found out that he was mad that the songs and speeches were about me. He had only few friends and a small family. They had also made speeches and a song, but apparently I got more attention than he did. 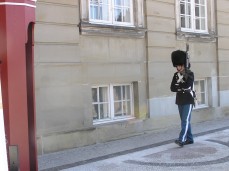 A “Garder” from “Livgarden” guarding the queen’s palace in Copenhagen 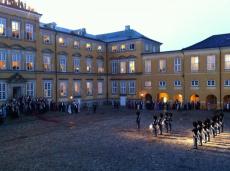 Situations like that escalated day by day at the “Honey Moon” and through the 9 years of marriage. He would say ugly things about my parents who had received him with kindness. I never felt I could defend myself because I got so overwhelmed by the sudden attacks. If I tried he got really mean. I had to find ways to escape the situations. I encouraged him to take a new education to be more satisfied. He studied National Economy and did very well. Got new jobs after that. But it didn’t help his temper. I slowly found out that a person can take several fine educations but still be a complete ignorant in human relationships.

I asked him to go for his sports interests cycling long races and running. Did it help? It helped me to be on my own with my children while he was away. The holidays were the most difficult times, because then we had to be together as a family.

I am writing this because I would like to warn young people not just to judge from the look of a person but to ask yourself if you are safe with the person and feel that you know the inner personality. How does he or she react under pressure? How does he or she treat you and your friends and family?

Why was he like is was? One of the reasons was that he had felt isolation from his early childhood. He described it like sitting behind a thick glass wall! His earliest memory was to be tied to something on a lawn all alone. His mother was very nervous and his father got anger fits at any occasion. His mother died when he was nine years old and soon every trace of her was removed from the house. His father married someone

I understood that he had difficulties.  In the long run I couldn’t manage more hurt and anxiety. I chose to become a single mother with four children. They were between 7 and 1 1/2 years old. The oldest of them remember the relief when they realized that he was not going to be a part of our family any more. I have forgiven him a long time ago but I have had to live with the consequences for my children who were stuck in difficult situations on holidays and weekends with him.

One of them manages by playing up the odd and strange situations he experiences when he gets visits from his father as a grown up person.

Two of them have had enough and have cut the connection and one is still trying to understand or to have a relationship even when that is impossible.

I am learning a lot by a wonderful blogger called Cynthia Bailey Rug who grew up with a narcissist mother and had her life ruined until she understood how to understand what she had been trough and shares her life lessons with us all trough her many writings un how to go on with life. She teaches on boundaries and keeping your self-esteem up when you are ever reproached from your abusing narcissistic parent or spouse. If any of you have gone through these “Roller Coaster” feelings in a marriage or from a parent Cynthia has a lot of good posts to help open the lid to the compressed feelings.