Whenever I travel around in Denmark my husband and I check on our app airmen.dk if we are nearby any of their graves. Many of the graves are held by the Commonwealth War Graves Commission and you can see the characteristic Head Stones like in the war cemeteries in Normandy France. Some were made very quickly after the accidents and were cared for beautifully by the local people at the churches spread over the country.

A few weeks ago we visited Bispebjerg Cemetery and area in Copenhagen where I was born. 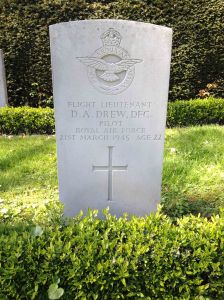 Flight Lieutenant D.A.Drew fell down in Fælledparken in Copenhagen on the attack on Shell house 21st March 1945. He was hit by German flak. 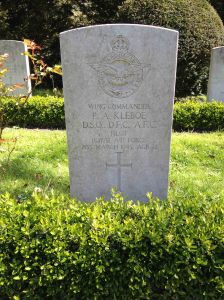 Wing Commander P.A, Kleboe Pilot Royal Air Force 21st March 1945 Kleboe fell down over Frederiksberg as the first one at the attack on the Danish Shell House. (Gestapo headquarter)

R.J.W. Hall Royal Canadian Air Force 21th March 1945 age 30 The navigator in Kleboe’s Mosquito. They hit a tower as they had to fly very low to avoid German radars.

I have described this important R.A.F. attack in another post.

The exit gate at the Bispebjerg Cemetary

We are forever thankful for the sacrifices of these brave young men.