As if the opportunity to visit the Château de Chambord wasn’t reason enough to get excited, there I was, just when they were to begin their annual grand concert dedicated to the French Horn! (or as they call it… “the Hunting Horn”)

I was about to make an unplanned discovery!

Remember the old days when, in order to drive almost anywhere, you had to take the basic two-lane road?  This meant, of course, that trips took longer, traffic was more dense and there was more time spent in the back seat either entertaining oneself or squabbling with a sibling.

A nice thing about those days however was that such roads took you through villages near small hamlets, allowing you a glance into small-town life. You saw local residents out for a stroll, getting groceries or simply gathered for conversation.

Then came the autoroutes… the highways…  the freeways.

The names change, but the concept is the same.
You drive fast and are whisked far away from city centers and town squares.

Fortunately, as the A10 highway winds it way from Paris to Bordeaux, many of the famed castles of the Loire Valley are only minutes away. Such is the case of the Chateau de Chambord at only 9-minutes away from the nearest exit.

Construction began in 1519 under the reign of François I who intended it to be more of a hunting lodge than a permanent residence. In fact he only spent a few weeks total at the castle during his reign. At over 5,ooo hectares in area and surrounded by 32km of stone wall, the castle was indeed a sizeable hunting domain and was declared a UNESCO World Heritage Site in 1981.

I arrived at roughly 6pm so a visit of the actual castle was out, but since the sun was still very high in the sky (it goes down after 10pm at this time of year) I opted to explore the park surrounding the castle.

There are a number of ways to visit the grounds, including a 1.5hr Jeep 4×4 excursion, bicycle rentals, and even boat rentals to row the grand canal – the Cosson – but again, my arrival time precluded me from any of those options.

No matter… I’d come to stroll.

As I always do, I made sure that my iPhone was fully charged (it’s also my camera), that it was on airplane mode (I wanted no distractions) and off I went. It’s both important and refreshing to be completely disconnected from time to time. Don’t you find?

The walk around the grand canal is roughly 4km and it took about one hour to complete. There are fewer tourists in June, making it a wonderful time to visit! 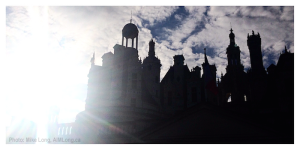 After completing my stroll, I found a park bench just next to the castle but yet completely secluded… a perfect place to sit and read for a bit. Interestingly, the portion of the book I was reading (Deep Work: Rules for Focused Success in a Distracted World, by Cal Newport) was underscoring the value of walking in nature when it came to cultivating the mind’s ability to approach work or various tasks creatively and for improving memory!

After a while however… I heard a series of what I thought were trumpet fanfares coming from within the château.  I saw others making their way toward the entrance so as any curious tourist would do… I followed suite.

It turns out that they were not trumpets, but rather Cors de Chasse or as I knew them in English, French Horns and the annual gala concert of the Chambord Horn School was about to begin.

The French horn is a curious instrument. One of the first things I noticed, upon taking my seat, was that the music stands were facing the audience…. meaning that musicians would be standing with their back to the audience.

Of course… given the configuration of the instrument when played it made more sense to have the sound coming out toward the audience.

Two lines of musicians stood in a “V” formation in their crisp, forest-green Haute Touche outfits. As pieces were introduced… the musicians faced the audience and when they played, they turned to face the rear of the stage.

It’s not the most melodious instrument but it’s fascinating in it’s concept. There are no keys or levers, so differences in pitch are produced according to the pressure that musicians apply with their lips, to the mouthpiece: More pressure… higher pitch, less pressure… lower pitch.

Also… they learn the pieces first by singing them, then only when the pieces are memorized are the horns brought in. Once used to communicate, among hunters, information on the hunt… it is now mostly used in the context of ceremonies & receptions, to keep the tradition alive.

So you see… sometimes there are some pretty great things that happen only a few minutes off the highway. Do yourself a favour. Every once in a while, leave the high-speed pace behind and visit something just off the beaten path. You never know… over and above your plans… other pleasant surprises may just await you!

Want to know more about the Château de Chambord?

Mike Long is a Canadian pastor living in France and who blogs over at AIMLong.ca. He loves God, his family, small backyard animals, travel and mobile photography.