Strolling Along the Seine

There are a number of ways to see Paris… but today I want to take you, by foot, within arms’ reach of the Seine River, arguably the life-blood of France’s capital city.

If you’re a regular reader of Maria’s blog, you may have come across my previous post entitled Strolling Through Paris, in which case it’ll come as no surprise to you that I’m a proponent of getting off the beaten path every once in a while.

As far as Paris is concerned, the beaten path consists of the well-worn sidewalks or pedestrian through-fares to and around iconic buildings and monuments, of which there is certainly no shortage.

I too indulge in the monuments from time to time and never tire of showing them off to friends or guests that come our way, but when I’m by myself, I prefer to indulge in the quieter side of things. I go down to where there are fewer people and I feel like I get to know the city just a little bit more intimately.

Let me introduce you to the Seine River.

Both Industry and Beauty 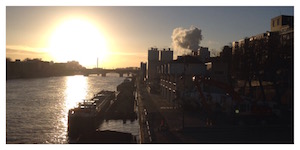 When you think of the Seine, you likely most often think about the views of Notre Dame, the Louvre or the Eiffel tower – iconic monuments within a stone’s throw of the river.

If, however, you were to follow the course of the river slightly further to the east, you would pass the Quai de Bercy and find yourself at the Quai d’Ivry, adjacent to Ivry-sur-Seine. Before the Seine was primarily known as the backdrop for beautiful buildings it was also a working river; a key concourse for shipping goods from the North Sea into the heart of eastern France where it finds its origin in the Bourgogne-Franche Comté region, some 30 kilometers north of Dijon.

East of Paris, in Ivry-sur-Seine, one still gets a sense of the working nature of the river as industrial ports facilities and enclosed péniches replace the glass-covered fare frequented by tourists.

Although it would be quite a walk from the Quai-d’Ivry to the Institut de France (pictured here), it can definitely be done.

The Institut is home to many associations and learned societies, not the least of which is the Académie Française, responsible for matters pertaining to the maintenance of the French Language. For many tourists, however, it is simply known as the cupolated building at the end of the pont des Arts or, as it is often known… “the love-lock bridge” (although the love-locks have been removed and are springing up elsewhere along the river).

If you happen to be crossing the pont des Arts, keep and ear out for the accordion player that often plays for donations from passing tourists. If you’re lucky, as you pass under the bridge… he may be playing the famous song “Sous les Ponts de Paris” (Under the bridges of Paris).

Living on the Seine

The Seine isn’t just for working boats and tour boats however. There are people who moor their bateaux along the quais and live there year-round.

It’s not unheard of to see working river boats with a small car on the deck and a crane installed for moving it to land when conditions allow or necessity calls for it.

I’m convinced this car, however, is more decorative than anything else. In all my trips to Paris it’s always been there, in the same place. A personal floating museum piece perhaps?

One thing’s for sure, it you’re the resident and you’re inviting friends over for dinner, it’s easy to give them directions: “About 3/4 of the way down the quai with a red car on the deck!”

Look for it when you’re in Paris!

Sit for a Spell

One of the nicest & most relaxing memories I have from time spent in Paris was a Friday night when I grabbed a Starbucks and sat along the Seine just opposite the Musée d’Orsay. I journaled, listened to a podcast, sipped my Starbucks coffee and watched boat after tourist-filled boat glide by: Different sizes, different shapes and some reminiscent of different eras.

You want memories like this from Paris, you really do.

If you are traveling to Paris, plan to take some time out and just sit a spell (as my grandfather used to say). You’ll see parisian life pass you by… jogging, strolling, walking arm-in-arm, sharing an embrace. You’ll get to see the sunset and cherish that simple (and free) memory. You’ll get to drink in the sights and the smells of this legendary European waterway.

Next time you visit Paris, be sure to stroll along the Seine.

“Strolling along the Seine” is the second in a four-part mini-series of Paris-themed posts that Mike is preparing in lead up to the
March 31st Amazon launch of his new book:
Paris 3 Days No Stress

Mike Long is a Canadian pastor living in France and who blogs over at AIMLong.ca. He loves God, his family, small backyard animals, travel and mobile photography.