The IKEA Museum in Sweden

This post is #4 in a series on places in Sweden.

My husband and I took a car ride in Sweden and drove 2000 km in two weeks in May. #1 The House of Emigrants, #2 Two Old Town Centers in Sweden, #3 Huskvarna Factory Museum in Sweden.

We took a long detour in the south of Sweden to see the IKEA Museum which was the  first IKEA department store in the world opened in 1958. Now numerous stores are found in about 60 countries.

Why was it so important to drive extra five hours to get there and stay overnight in the area?

In my late teens I saw a picture of a bedroom for young people inside a catalog from IKEA. The madras was blue and underneath the bed were big red shiny wooden drawers for the bed-clothes. On the wall were smaller blue cushions in leather straps. In front of the bed was a square blue painted table with shelves on wheels. My father could do anything as a skilled craftsman. It was never an option to buy the things. I think I asked him to make these bedroom things and he quickly agreed. I have mentioned this room in an older post too.

I hoped to find the exact picture I had in mind from their web catalogs. I admit it was a bit disappointing as I only found something of the same style. The series was called POP68 and had these bright shining colors and was made for teenagers. My father must have made the room for me using two or three of the pages and decided what was easiest for him to make.

The following pictures are from a website at the museum

Sent to me from Ikea’s Museum

IKEA catalog a simple bed with cushions on the wall 1967

The white table with wheels 1968

The IKEA catalog 1967. The drawers were like these to the left. Only two instead of three

Today we would find it very normal to have rooms for teenagers, but up until  the mid/late 1960s you were either a child or an adult. The British inspired pop culture spread from fashion in clothes to furniture.

It took me hours to scroll through their catalogs and its tiring for the eyes to look at so many pages. Could it really be that my father had changed the design to give it a more personal touch? Maybe I will never know. I don’t have pictures of bed but mine was bright red and blue. I loved the Royal Air force colors and I still do.

You started with the story of IKEA with everything about Ingvar Kamprad, the man who founded it. He came from the poor Smaland that I have described in former posts. As a young boy he started to sell matches and later fish and Christmas tree decorations. Furniture was added to his list of products from 1949 in post order. He has always lived very modestly himself though he is one of the world’s richest people. He has an old car and travels always on economy class.

“Nobody has ever got rich by wasting money” 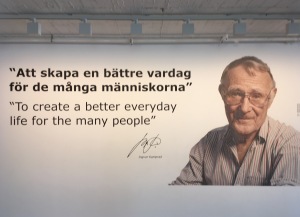 The motto of the IKEA founder Ingmar Kamprad

IKEA is put together by the founder with his initials, his childhood home “Elmtaryd” and his village Agunnaryd

Unfortunately he was involved in a Nazi party in his youth. He has admitted that he was influenced by his German paternal grandparents who had immigrated to Sweden. He has regretted his youthful mistakes in a letter to his employees so I will put that chapter of his life aside too. So far nobody is blamed for communistic emphasizes in their youth even though Stalin and Mao slaughtered even more people than the Nazi regime.

I would appreciate that IKEA today wasn’t so political correct. You can’t buy Christmas decorations anymore. They call it something else like “Light festival decorations”. 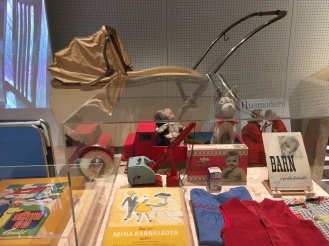 A good quality of the make “Emmaljunga” from the 1950s

An example of a Swedish home in the beginning of 1900s

Ingmar Kamprad  wanted to make some fine designs available to people for a reasonable price and I agree that he has succeeded in that. In IKEA they are always trying to bring the costs down. The flat packets of the furniture started already in 1953.

In the museum you see the things they sold chronologically on pictures and in displays. The day we were there a lot of retired people arriving in buses came in groups and were shown around by guides.  The restaurant at the museum was of a much higher standard than at the IKEA department stores.

In an earlier post I have described my feelings for IKEA.

In the museum you could “make” your own front page of a catalog. A studio was set up and as you pressed a red button on the wall a picture was taken and could be collected without costs from a printer a few minutes after. 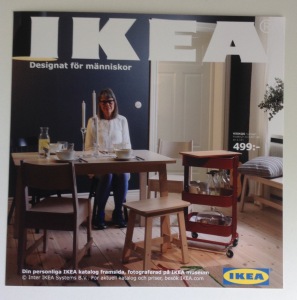 A fake IKEA catalog you could make as a guest