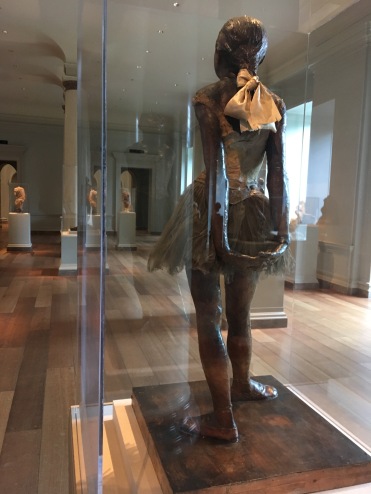 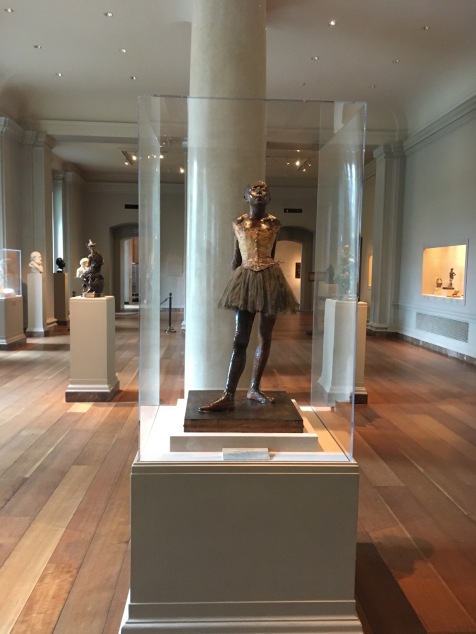 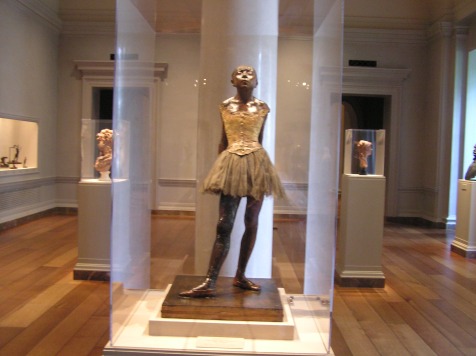 The Little Dancer in National Gallery of Art in Washington, D.C. taken 2009

The original statue by Edvard Degas ( 1834-1917) is at the The National Gallery of Art in Washington, D.C. It’s known and loved by many because after the death of the artist it was cast in bronze and placed in many different museums. The link to the museum explains in more detail.

When Degas displayed it at an exhibition in 1881, this realistic statue brought mixed feelings. The public was not accustomed to contemporary subjects like this little ordinary dancer. Many critics found her ugly. Quote from the Tripsavy blog on the model:

The model was Marie Genevieve von Goethem, a Belgian student who had joined the Paris Opera’s ballet company as a means of getting out of poverty. Her mother worked in a laundry and her older sister was a prostitute. (Marie’s younger sister also trained with the ballet.) She first posed for Degas when she was just 11, then again when she was 14, both in the nude and in her ballet clothes. Degas built the sculpture out of coloured beeswax and modelling clay. Marie is depicted as she likely was; a girl from the poorer classes training to be a ballerina. She stands in the fourth position but is not especially poised. It’s as though Degas captures her in a moment during a routine practice rather than performing on stage. The tights on her legs are lumpy and pilled and her face pushes forward in space with an almost haughty expression that shows us how she is trying to hold her place among the dancers. She is brimming with forced confidence and gritty determination.

Degas was obsessed with the movements of the dancer and made many sketches of her from all angles as a foundation for his modelling of the statue in Washington, D.C. in original wax, Yellow wax, hair, ribbon, linen bodice, satin shoes, muslin tutu, 98.9 x34.7 x35.2 cm. Here is a short YouTube video on her ballet movements.

Three studies of Marie in the fourth position

Little girl practicing in the barre 1880

Sketches showed in a catalogue I bought from a special exhibition on “Degas and the ballet, picturing movement” at the Royal Academy of Art in 2011.

I have seen it in Glyptoteket in Copenhagen, in Tate Modern in London, in Museé d’Orsay in Paris, in New York Metropolitan Museum, in The Museum of Fine Art Boston, Philadelphia Art Museum and the original in Washington, D.C.

When I see her, I think about the hard life she might have had and how it would have been to pose for the artist at that tender age. In many of my pictures, it seems that nobody stops to see her and she makes us believe she doesn’t care.  She seems very much alive even now 137 years later. The more I see the statue, the more I like it or her.

After I made this post, I found one on Instagram by anDutch art expert Jurgen Vermaire on his @lets_talk_about-art and told him about my interest for the little dancer. Here is his text for the model from The National Gallery of Art in Washington, D.C. :

Edgar Degas, “Little Fourteen-Year-Old Dancer”, 1880, tinted bronze, silk & cotton, 98 cm, Metropolitan Museum of Art, New York.
Edgar Degas, 1834-1917, was a French artist specialised in scenes of contemporary life, including ballet dancers, entertainers, sports and women at their toilette. His mastery of technique was superb, and he experimented with various media. Degas spent most of his life in Paris. He studied at the Ecole des Beaux-Arts and received training by the academic painter Louis Lamothe. Degas deeply admired Ingres, but soon developed an Impressionist approach, under the influence of Manet, whom he knew well. Degas exhibited from the beginning with the Impressionists in Paris, but he was able to follow also an independent path. Degas was a reclusive man, though famed as a brilliant conversationalist. He practised the new technique of photography, which perhaps affected his approach to composition. He was a sculptor as well as a painter, especially in his later years when deteriorating sight troubled him, and he was forced to work in the studio close to the model. His later graphic works are mostly in pastel. The Belgian ballerina Marie van Goethem was 14 years old when she modelled for Degas. The original sculpture was made of wax and was so realistic with its real hair and shoes that it caused a scandal at the Impressionist exhibition in 1881. Degas never exhibited a sculpture again. After his death twenty-five bronze casts were made of this sculpture. The main difference with the original wax version is that the hair, the shoes and the blouse are cast in bronze. The hair ribbon and the skirt are still executed in cloth. One of Degas’ nieces was responsible for choosing the clothing for the bronze versions. Later these versions were restored, and the museums themselves made choices about the fabric and the shape of the skirt and hair ribbon.
Check out my new account @art_questions_and_debates and
@my_favorite_work_of_art