The former Naval Base, now the MOHAI in Seattle at Lake Union Park

MOHAI, Museum of History and Industry, Seattle WA. Its home is from 1942, a former Naval Reserve Armoury and a Naval Training Center during World War II.

I had been looking forward to seeing this museum as we were visiting Seattle. We wanted to find surviving buildings from constructor Hans Peterson. Through our blogging, we got in contact with Paula Peterson, whose father was a Danish immigrant and builder of Seattle. My father’s uncle lived there at the same time as Hans Peterson,

Wanting to know about the development of the city from the beginning of the twentieth century, I would have liked to have found more of it at the MOHAI. 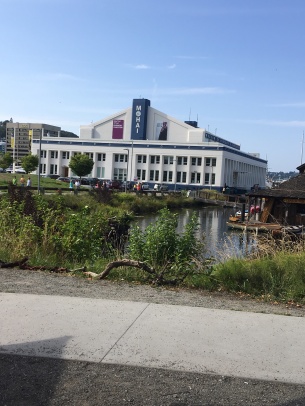 The museum was new and full of screens with speakers talking about the history of Seattle. There was no way of turning off the volume, so concentrating on reading was nearly impossible. Only a fraction of their stored material is on display.

I found an interesting detail about a stained glass series showing sleigh dogs on their way to the Gold Rush in Yukon. The glass ornamentations have initially been on the Arctic Club, the most prominent of Hans Peterson’s buildings. The Museum Shop had books on the old Seattle only not Paula’s book on Hans Pederson.

We gave the man working there information on the book about the discovery of Paula Pederson’s then-famous father.

Dog Sled is the best way to get around the Klondike in Winter. 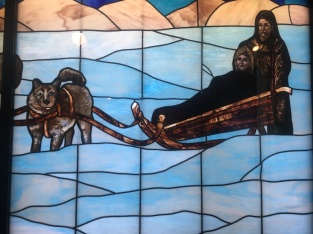 To get around in Seattle, we discovered that we could buy a transfer ticket on the busses for one dollar. We were “Senior Citizens” which saved us a lot of walking. Each city has it’s own system of transportation, and it takes some time to get acquainted with it. 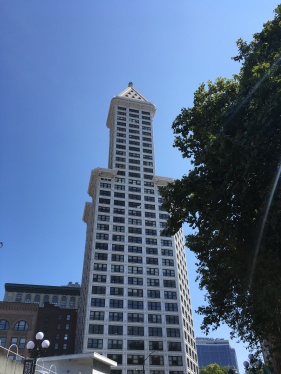 A closeup on Smith Tower
From the museum, we went to the Smith Tower, a landmark of Seattle; the highest skyscraper of the West Pacific when built. Behind it, is Hans Peterson’s King County Court House from 1930 just before the big economic crack. 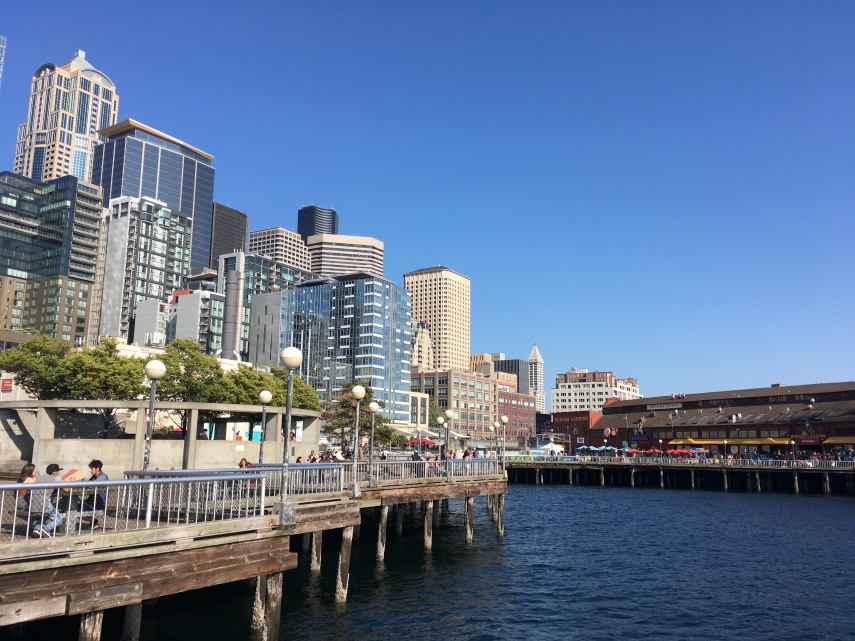 A glimpse of the Smith Tower from the waterfront

The Smith Tower had an interesting museum with photos and artefacts from its origin. You follow some questionable characters who reigned in the city full of crime and corruption a little more than a hundred years ago.

We came up to the top of the tower by the original old man guided elevator.  A few years ago it was modernised to stop automatically at the different levels. Initially, the driver would manually make it stop at the right place. The guide managed to tell us a lot of stories while going up to the restaurant at the top. You could enter the balcony without having to buy anything in the bar. The view of the city and harbour was stunning.

In the evening light, the Arctic Club from 1916 is like a shining pearl. We ended a full day of sightseeing by visiting the historic place on Third Avenue and Cherry Street, now a luxury hotel. A concierge showed us much interest and let us see the essential parts of the historic rooms. The members of the club were men who had earned a fortune on selling stuff for the gold rushers. They had better luck than most of the gold diggers.

The Arctic Club built 1916. Constructor Hans Pederson is honoured with photos on the wall in the Foyer

The Arctic Club on Cherry Street close to the Smith Tower. Hans Peterson was the contractor 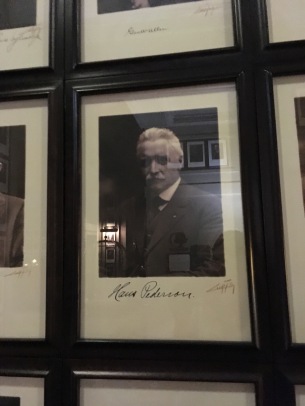 A photo with Hans Petersen inside the Arctic Club

A photo with Hans Petersen inside the Arctic Club

The Dome Room inside the Arctic Club

The Dome Room inside the Arctic Club

The walrus ornamentation on the Arctic Club
At another time, I will return with a blog on the attractive Gold Rush Museum close to Pioneer Square in Seattle.