Lawrence (1899) and  John (1906) were born in Iowa and North Dakota, respectively by immigrants from Denmark. Their father and mother, two small sisters, came to the States to seek new possibilities for a better life in 1893. This immigrant Peder Jorgensen, who went to the States in 1893, is my husband’s great-grandfather’s brother.  Henry, my husband and  Leah are third cousins, and luckily, they found each other through their searching for ancestors.

As a boy, my husband dreamed of having a relative in the States who could swing a lasso. Henry’s family had never told him of the emigrated ancestors so when he met Leah here in Denmark for the first time last year, she could say to him that Lawrence, her grandfather had been both a cowboy and a sheriff.

I have always been attracted to old photos. The photos shown in this post are from Leah with the brothers Lawrence and Johnny, their two Norwegian wives, who were sisters and their five children.

The Jorgensen families in 1937 in Montana

You can tell that they are used to being together, and they are all enjoying it. The sisters look at the camera and talk to each other at the same time. The two mothers are in another world together at that moment.  There is a gap between Lawrence on the left and his wife. The children sitting close to each other. Kermit is a six months’ old baby looking eagerly to his father, Lawrence. They have been “talking” seconds ago, and Kermit wants his father to look back.

Lawrence is looking at the camera, his legs in a relaxed posture on the stone fence and his arms crossed slightly smiling and seem at ease like the rest of the company. He is a slim, hard-working man with visible cheekbones. Two of the children are leaning towards each other and are whispering secrets. The small one at the right side can’t follow their conversation and looks up to his mother’s face. John is the photographer, the space on the stone fence shows where he sat a moment ago.

The Jorgensen families in Montana 1937 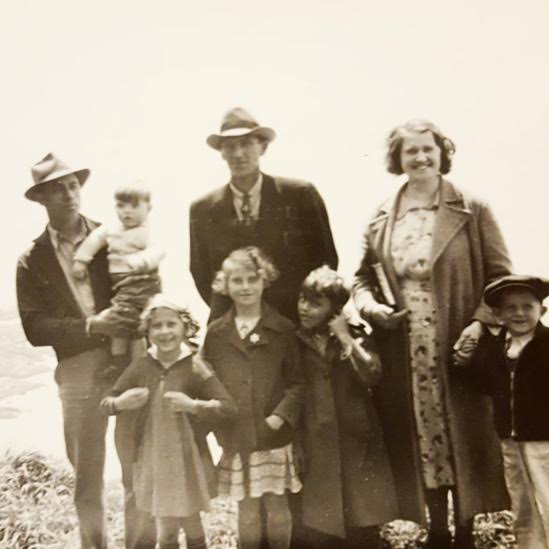 Family Jorgensen in Montana in 1938

The same two families on a summer Sunday. This time Maysel, the wife of Johnny, is the photographer. Kermit (Leah’s father)  is now on his uncle’s arm. Lawrence is standing behind the children Irene and Kenneth. Thelma is carrying her bible. They have been to church. The little boy on her right side is wearing a fantastic hat. Lawrence is still more hardworking with still cheeks more hollow than last year. The brothers wear smart hats. The two youngest children in the front row are smiling happily. They are soon going to eat something sweet and then to play the rest of the day.

Imagine that we could walk up to them and ask questions about their lives and just be there together with them. For love of her father’s family, Leah moved from the East coast to live in Lawrence’s footsteps. She is a wine producer in Oregon.

I would be pleased to know a bit about your ancestors. Where did they come from?