Kim Malthe-Brun was executed a month before the liberation of Denmark. Today, 80 years after we in Denmark celebrate the end of the German occupation. He was only 21 years old when he died. As a sailor he helped transport weapon and people illegally to Sweden.

He wrote farewell letters to his mother and his girlfriend where he asked them not to let his death ruin their lives. He was calm and leaned on his faith in God. The German commander who signed his death penalty managed to avoid persecution.

This past week there would have been a memorial at the burial place for the many freedom fighters and policemen who died in concentration camps. A big concert in the famous Holmens Church in Copenhagen scheduled to May 6, was also cancelled. 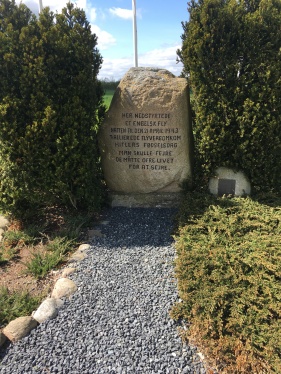 A memorial for allied airmen whose plane crashed here

A memorial for 6 allied airmen whose plane crashed here

We remember the liberation on May 5

We regained our freedom 75  years ago and we couldn’t celebrate this great memory of these brave people who gave their lives for us.

The lovely message about the liberation

Instead of a uniform, the freedom fighters wore this blue armband on their arm in the days of liberation

“Spring came and Denmark was freed”