My mother went to London in June 1946 soon after WWII was over. She met Josephine from Manchester at Highgate Youth hostel while washing up. Their friendship developed into a lifelong relationship. My mother kept all Josey’s letters and later this year one of her sons and my husband and I will publish a book on this collection of letters. A few drafts of my mother’s letters are saved so to tell our story, I will add the Danish background to compliment the book. I have a twin brother.

The Story of Miss Moppet

When we were four years old, we surprisingly got birthday presents from Josey in England. I was so thrilled. I remember the feeling of getting a non-expected gift.

There is a book for each of you in the post

I couldn’t understand how the mice could misbehave so badly. Why did they destroy the dolls’ food? The sight of the destruction nearly gave me a tummy ache.

Torben’s book was about a cat who tried to trick the mouse. The picture with her and the dust cloth wrapped around her face and later plays ball with the mouse is something I will never forget.

A scene from “The Story of Miss Moppet”

Text from the “Two Bad Mice” story by Beatrix Potter

A scene from “The Story of Miss Moppet”

The books have disappeared, but I have since bought all of Beatrix Potter’s children books and even visited her house in The Lake District. The Lake District was spoken about a lot in Josey’s letters. That made it very special for me to go to the Lakes.

We got other things too for our birthdays like toys to build into something or word puzzles. They could be hard to use as we have three more letters in our Danish language than in the English. I read in a letter from my mother Ruth that we also got fountain pens. She said in the letter that we were very happy for them. Unfortunately, I can’t remember anything about it.

At Christmas, we sometimes got small decorations. I loved the candles with angels resting on moons and regretted that I had one burnt. 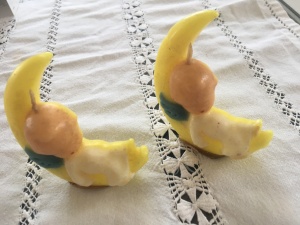 Christmas decorations from Josey in the 1950s

When I was eleven years old, I got two pairs of tights in Scottish check. Tights were not yet standard in Denmark, and I was so proud. I had a hard time to put them on as I had grown more than Josey expected.

When I got my four children, Josey sent presents as soon as they were born. Josey was my “English mother.”

Our mothers wrote letters from July 1946 until my mother died in 2008. Josey died six months later.